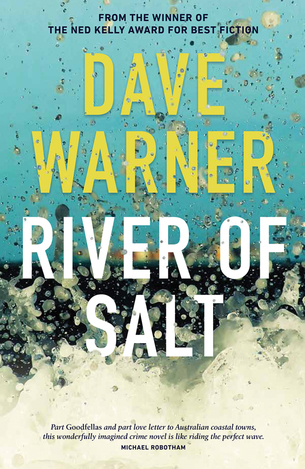 Philadelphia, 1961. After having to give up his brother to save his own life, hitman Blake Saunders flees the Mob and seeks refuge on the other side of the world. Two years later he has been reborn in a tiny coastal Australian town. The ghosts of the past still haunt him, but otherwise Coral Shoals is paradise. Blake surfs, and plays guitar in his own bar, the Surf Shack.

But then the body of a young woman is found at a local motel, and evidence links her to the Surf Shack. When Blake’s friend is arrested, and the local sergeant doesn’t want to know, it becomes clear to Blake – who knows a thing or two about murder – that the only way to protect his paradise is to find the killer.

“Mile after mile of bush. Gum trees standing straight and silent along the side of the road like ghosts sitting in judgement on the living: on him. It was amazing you could drive so far and see so few people. With each passing minute, the sun sunk lower, as if embarrassed by the outcome of the day. Light that had been pale, almost white when he set out, turned the colour of urine. My life is like this, Blake thought. I keep driving on in my car, removed. I don’t get out and touch what’s around me. Little by little, things get darker and you don’t really know where you are any more, you just follow white posts and try not to crash.”

Blake Saunders has had a lot of unusual white posts to follow in his life, from life in Philadelphia as a hitman for the Mafia, to bar owner and guitar player in a NSW coastal town. Both lives have involved a lot of forethought and planning and a cautiousness that’s inbred, instinctual and habitual. He’s also able to accept that which cannot be changed – regular payments to the local cop to ensure the lack of business competition, or the need for personal intervention when that cop refuses to extend their arrangement to more active protection. He’s loyal to his friends and employees though, so it’s not just a killer he’s after, he’s also keen to track down the standover men who took their bid for protection money way too far.

River of Salt is an interesting undertaking from Dave Warner. The idea came to him at an Atlantics’ gig, so the musical components of this novel are strong, the love that Saunders has for the surf-styled guitar band he plays with obvious. The rest of the novel though is different from more recent outings by Warner, it’s more slowly paced, Saunders is restrained (I think that’s the best word to describe him), and there are side-threads involving other characters that create a sort of Hydra of a story with the central neck obscured by heads until they are all accounted for.

The slower pace, and the controlled, cautious Saunders may take a little adjusting to for anybody who has only read the recent books. There are some echoes of Andrew (Lizard) Zirk in Saunders though (see Warner’s earlier works Murder in the Frame; Murder in the Groove; Murder in the Off-Season), and there’s hints of the sort of controlled mayhem that showed up in Exxxpresso). Mostly there’s a feel of a potential new series character, and a slight change in direction from the more police procedural / Western Australia based works of recent years.

The strength of River of Salt is definitely in the idea of a stranger in a strange land, back in the days when communications weren’t instant, and people could reinvent themselves to some extent. It’s exploring just how far you can go with that idea, and how much of the old you will never go away.