I got a lump in my throat when I watched Teresa Palmer – as Michelle Payne – cross the line to become the first female jockey to win the Melbourne Cup. That’s despite remembering a great deal about that fateful day on the first Tuesday in November 2015. I was concerned that knowledge might detract from my enjoyment of the film, but it didn’t. Ride Like a Girl is an against-the-odds crowd-pleaser and it makes no attempt to be anything else. 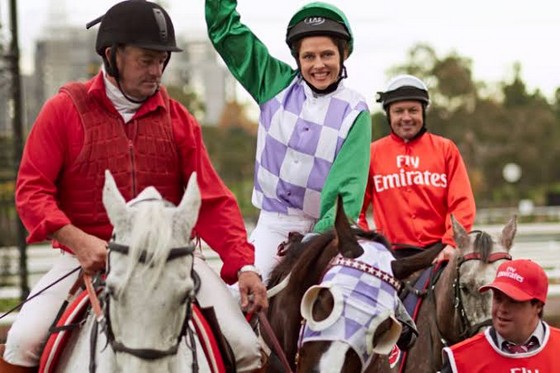 Many Australians will know the backstory of how Michelle and her nine siblings were brought up by their father after their mother tragically died in a car accident. And that eight of the siblings entered the racing industry. Much is made of Michelle’s racing accident … leading to an injury that would have ended many riders’ careers. What shows through is her determination and courage.

I thought Palmer was well cast in the title role as she straddles Payne’s familial and professional responsibilities. We learn little about many of her siblings, except for strapper Stevie, who plays himself. Veteran actor Sam Neill ensures he plays down Michelle’s father Paddy. He’s represented as an insular person, loved and respected by his clan but someone who – like Michelle – has a strong stubborn streak.

Sullivan Stapleton makes a lasting impression as Darren Weir, the now disgraced trainer of the Melbourne Cup winner. Magda Szubanski is hard to forget as a sister wanting Michelle to continue her education at the Ballarat Catholic secondary school she attends, only to land a lucky wager later in the piece.

I really like how the film transitions from a documentary start (only a couple of minutes) to a straight narrative. The story arc – as written by Andrew Knight (Hacksaw Ridge) and Elise McCredie – is well set up that way. It is also the feature directing debut for Oscar-nominated actor Rachel Griffiths (Don’t Tell); and she makes a fair fist of it.

While Ride Like a Girl hardly presents any surprises. But it’s a solid family film with a strong message about female empowerment.