Hero or villain? Richard Jewell, the movie, answers that question about the chief suspect in the Centennial Park bombing in 1996. That incident killed two people and left more than 100 injured. 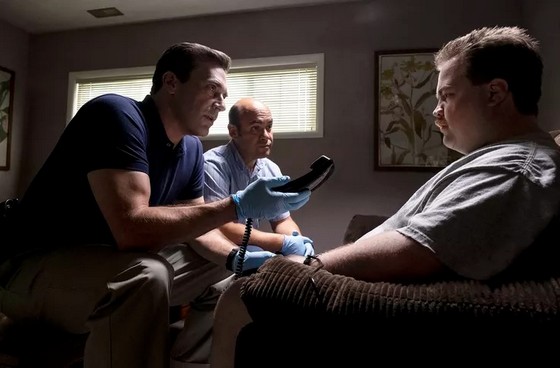 On 27th July that year, during the Atlanta Olympics, security guard Jewell (Paul Walter Hauser) discovers a suspicious backpack hidden under a bench in the park. It contains an incendiary device. With little time to spare, he helps clear the immediate area around the backpack, ultimately saving many lives and minimising potential injuries. While he’s hailed a hero at the time, three days later his life implodes when the FBI jumps to the conclusion that he “did it” – he planted the bomb. The reason – profiling theory.

A large, single man, Jewell dotes on his loving mother, Bobi (Kathy Bates). She’s proud to see what her son did to save all those people – until she, too, gets swept up in the maelstrom. The pair are unable to move without media crews and the FBI tailing them and listening in to their conversations. Jewell then turns to Watson Bryant (Sam Rockwell). They had met at another job years earlier. Bryant impressed Jewell because he was prepared to listen to what he had to say, rather than making fun of him like others had. Bryant is a lawyer and Jewell now needs all the help he can get.

Billy Ray (Captain Phillips) wrote the screenplay based on a Vanity Fair article titled “American Nightmare – The Ballad of Richard Jewell” by Marie Brenner. The film features a surfeit of rich characters and first-rate performances. None are better than Hauser (I, Tonya) as Jewell; and Rockwell (Jojo Rabbit) as the rough and ready attorney. They’re ably supported by Bates (Misery) as Jewell’s mother who – like Jewell – is totally blindsided by the events that play out. Olivia Wilde (Her) makes quite an impression as gung-ho journalist, Kathy Scruggs. Jon Hamm (The Report) plays the morally questionable lead FBI agent Tom Shaw (a fictionalised character). Not surprisingly, he grates – just as he’s supposed to.