What Rhymes with Cars and Girls was the timeless first solo album by You Am I’s Tim Rogers. It tells of moving out and moving on, prompted by the ruin of Rogers’ own long-term relationship and relocation to Melbourne. And 18 years after its release, its songs still packs an emotional punch. Now it’s transformed into an entirely new work of the same name, the musical rom-com What Rhymes with Cars and Girls. 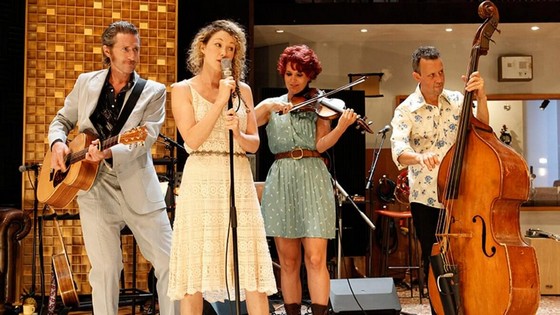 The show begins with introduction to working-class drifter Johnno (Johnny Carr). His song, he tells us, is tuneless and repetitive. He’s living with his terminally-ill father under the flight path on the western side of Sydney. This is until he delivers a pizza to Tash (Sophie Ross). She’s a free- spirited daughter of privilege; a North Shore lawyer slumming it in the backwaters of rock and roll as lead singer in an indie band. Love just happens as they swap stories and sing. However, as time rockets to inseparability and a summer wedding, tensions flare in response to their individual fears – and their clash of backgrounds and ideologies (in classic Ford vs Holden style).

Carr and Ross are not only strong vocalists, but are absolutely authentic as the 28 year-old Sydneysiders. They capture the small, idiosyncratic moments of a relationship as they relate their seemingly ill-fated union, directly to the audience.

The most noteworthy character, however, is the music. It sits in the background, in the hands of the on-stage three-piece band (including Rogers himself). This makes for easy transition from monologue and dialogue into song. Their approach is almost acoustic, in contrast to the rock sounds of You Am I. It’s a hybrid of styles from the rockabilly-esque “You Just Don’t Do It for Me Friend” to the folksy feel of “You’ve Been So Good to Me So Far”; and from the country of “Arse Kickin’ Lady From The Northwest” to the yearning ballad “I Left My Heart All Over The Place”.

Band members Ben Franz, Xani Kolac and Rogers inject character to make each number unique, such as in the animated violin sounds of “Happy Anniversary”. This plays as the couple trade metaphors about their simultaneous love and hate for each other six months in from the initial fateful pizza delivery. Musical director Rogers is a charmingly roguish band leader. Ever-present musically, he also adds backing vocals, harmonies and occasional reaction to centre-stage goings-on, without detracting from the story’s focus. 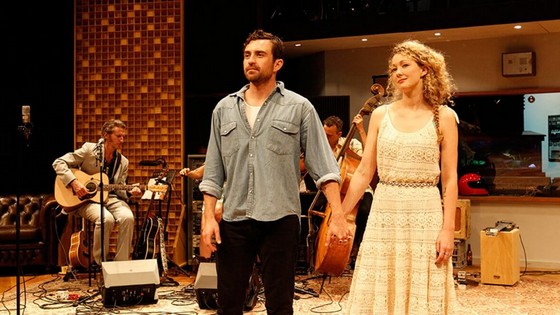 Production design facilitates the audience’s imagination as we follow the players around the detailed space of a subtly-lit recording studio. This creates a playground of sorts in which a balcony becomes a pier and a couch becomes a big old tree from which take-away is shared. And as the story unfolds, the themes and lyrics of Rogers’ album fill the spaces of the story, itself rich with wit and colloquial imagery thanks to memorably lyrical lines.

Similar to the musical Once (particularly with its mentions of falling as a motif of love), this intimate story of two lovers thrown together by circumstance is a humble, beautiful piece of theatre, thanks to the way all of its components combine. What Rhymes with Cars and Girls may be playwright/director Aidan Fennessy’s homage to Rogers’ album, but it is also so much more than this. He gives audiences a great gig in conjunction with an unassuming, simple and simply lovely show. Like its highlight song, “Happy Anniversary”, it is at once heartbreaking, funny and appealing, made all the more extraordinary by Rogers’ on-stage participation in creating its magic.