You might not be able to buy love, but you can Rent it. I discovered this 22 years ago when I saw Jonathan Larson’s iconic rock musical on Broadway. That year it won the Pulitzer Prize for drama and received four Tony Awards, including Best Musical. As a self-confessed Renthead, I not only know the soundtrack by (sing-along) heart, but have now been fortunate enough to see over half a dozen different productions. And comparatively speaking, Matt Ward Entertainment’s 2018 realisation is right up there with the best; which is particularly impressive given the theatre company’s emerging status. 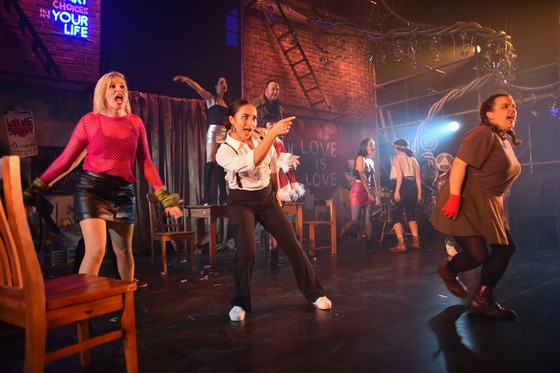 The high energy take on the modern bohemian classic packs a musical punch. In fact, it is always about the music, which barely breaks during the show’s duration. The entire musical is brilliantly performed by a live band that is showcased from within the scaffolding that helps set the scene of Bohemian life in the East Village’s Alphabet City. With a song range that includes soul, techno, Latin and gospel, there is an eclectic mix of styles, yet the soundtrack sounds smooth and succeeds in evoking a range of emotions. When the entire cast communes on stage for the slower, signature Act Two opener, “Seasons of Love” to ask what the proper way is to quantify the value of a year in human life, for example, one cannot help but both rejoice in their harmony but also reflect on Larson’s passing following the show’s off-Broadway final dress rehearsal.

Appropriately, the show begins musically too, with lone musician Roger (Luigi Lucente) sitting atop a table, playing his electric guitar. Even without conventional theatrical elements, the audience is immediately absorbed in the show’s whirlwind of raw emotion. It is not just Roger’s story, but one of a tight-knit group of complex characters, impoverished young artists living in New York City’s East Village in the late ‘80s, based on Puccini’s beloved opera La Bohème. From one Christmas to the next we follow their dreams, losses and loves as they struggle through life under the shadow of HIV/AIDS.

Roger is a grieving HIV-positive rocker. His roommate Mark (Tom Oliver) is a passionate filmmaker dedicated to intimately capturing the pivotal life moments of his closest friends. Together they live in a rundown, unattended warehouse loft owned by their former roommate Benny (Isaac Lindley), whose marriage into money has seen his become not only a budding entrepreneur but their rent collector. Their anarchist College instructor and computer genius friend Collins (James Shaw) is embarking on a new romance with Angel (Trent Owers), a big-hearted drag queen and street drummer who, like Collins, has AIDS.

Roger fears falling in love with Mimi (Stephie Da Silva), a spirited exotic dance and drug addict, while Mark still has feelings for his kooky centre-of-attention artist ex Maureen (Ruby Clark) who stages a performance piece, Over The Moon, to protest Benny’s plans to evict the homeless camp in the empty lot next to the loft. Unfortunately for Mark though, Maureen has left him for Joanne (Kirrah Amosa), a crusading lawyer from a rich family.

Despite the multiple, intersecting storylines, all members of the key cast are given moments to shine and shine they do. Indeed, there are no weak links amongst the entire ensemble cast. Tom Oliver is an endearing Mark in a Johnny Galecki type way. Lucente is an ultimately-passionate Roger and his “One Song Glory” solo rock ballad sing about his dying wish to leave his mark on the world is a sensitive and expressive early show highlight. While Owers is a little breathy in his physically-demanding solo “Today 4 U”, his gentleness projects Angel as the sweet soul of the show. And Shaw makes Collins’ Act Two “I’ll Cover You” reprise an absolutely heartfelt reminiscence, at once emotional and commanding. There is phenomenal vocal prowess amongst the ladies too. Da Silva makes easy work of Mimi’s high-energy attempt to seduce Roger alone in his apartment, “Out Tonight”; and “Take Me or Leave Me” is a powerful duet between Amosa and Clark during a dramatic breakup between the controlling Joanne and flirty Maureen. 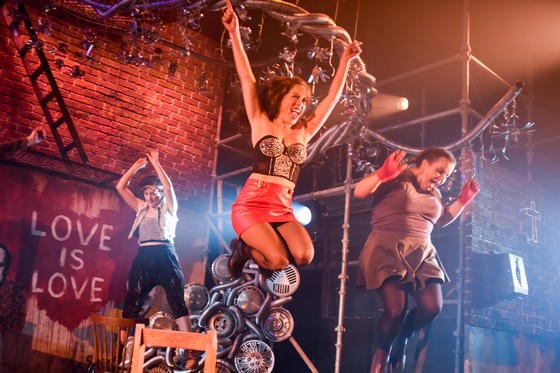 The ensemble numbers, however, ultimately shine brightest. The optimistic “Another Day”, is stirring in its rallying cry to embrace love and live in the moment according to the slogan ‘Forget regret — or life is yours to miss’. There is visual interest in every ensemble number too, with performers fully absorbed in their characters. Owers, for example, is especially nuanced in every glance and movement as Angel, even when as background to centre-stage action.

This is an exciting and passionate production of a ground-breaking work. Rent shows why its rock soundtrack has been a pinnacle of musical theatre history for over two decades. While aspects of its storyline may have dated, many of its themes of homelessness, poverty and substance abuse are still sadly relevant. More importantly still, is its beautiful, overriding message of love enduring beyond all else, which, as this production shows, still stands as central to the narrative for both old and emerging Rentheads to rejoice.