Luke Rogers, director of the new Australian play In Real Life, began a collaboration with writer Julian Larnach almost three years ago. In the program notes, Mr Rogers uses a quote from Sherry Turkle, a Professor of Science and Technology: ‘Technology doesn’t just do things for us. It does things to us, changing not just what we do but who we are’. 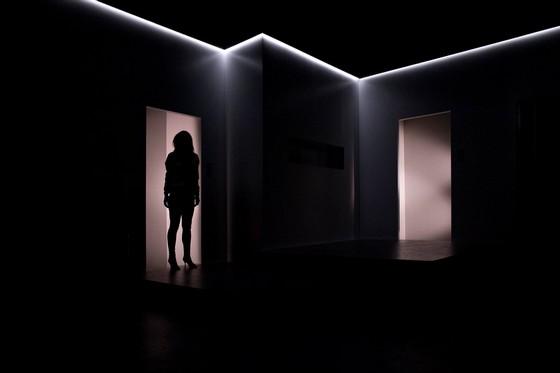 This play is about much more than technology […] Through the relationship between a mother and her daughter, this work examines our need for human connection, the dilemmas that arise when our technology develops beyond our existing templates for the world, and the lengths we are prepared to go to hold on to those we have lost.

Set some time in the near future we meet a mother, Theresa (Anni Finsterer). She has created a high tech ‘gadget’ called The Drum. The device is revolutionary in its applications for connection to all things in the world. Her estranged daughter, Eva (Elizabeth Nabben) arrives at her mother’s fabulous country getaway. This proves to be a modernist minimalist (empty) ‘house’ (production designer, Georgia Hopkins). Theresa finds that she knows less about her daughter than her technical creation. When Eva disappears – deliberately disconnecting herself from The Drum, maybe – Theresa finds herself desperate to re-establish connection, to find her daughter. The lengths to which she goes are extensive and, ultimately, delusional.

The play travels into areas of intriguing desperation. The writer’s trick to have one actor (Elizabeth Nabben) play multiple roles is absorbing and sustains our curiosity. The play in this production is better than the performance. Ms Finsterer and Nabben both deliver performances that are vocally underwhelming and so not at all commanding of our attention. Once again, James Brown has composed and created a sound design that propels the intrigue of the play forward. The Nether, another alarming futuristic gaze, also benefits from Mr Brown’s input. 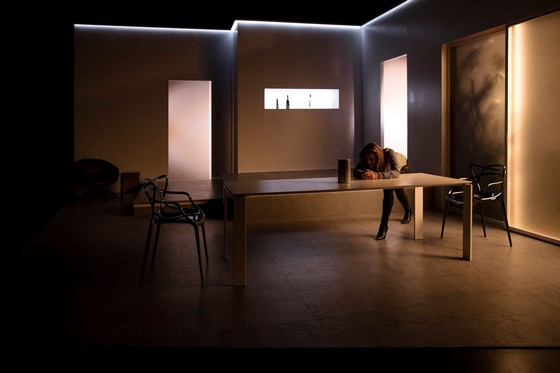 In Real Life, then, is an interesting piece of new Australian writing, hampered by performances that do not communicate to all of the audience. I sat in Row D in Seat 19 and found the play often inaudible or at best muffled – it was almost as if the actors were playing for themselves!