RBG is easily the best documentary to hit our screens so far this year. This insightful, inspiring and surprisingly entertaining documentary takes a look at the life and work of Ruth Bader Ginsburg, a long serving and influential justice of the US Supreme Court. 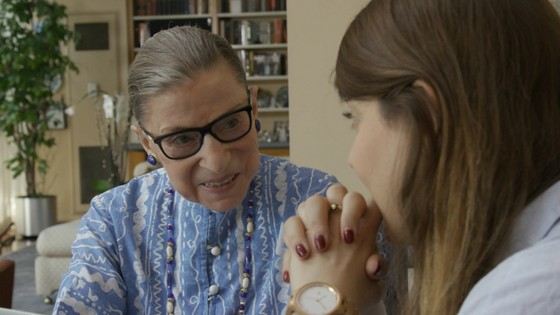 At the age of 84 she’s still full of energy, conviction and ideals. And she shows no sign of slowing down. A diminutive powerhouse with a sharp legal mind, Ginsburg has become a significant voice of dissent and liberal perspectives on an increasingly right-wing bench. But she’s determined to stick around as long as she can – so President Trump can’t replace her with an ultra-conservative judge.

This slickly packaged documentary is a labour of love for the filmmakers Julie Cohen (American Veteran) and Betsy White. White is a former documentary producer making her feature directorial debut here. The pair trace Ginsburg’s rise from humble beginnings in an immigrant family through the challenges she faced as one of the few female law students at Harvard University in the 1950s. They chart some of the key civil actions she tried before the Supreme Court which resulted in landmark decisions.

She’s a passionate advocate for equality and defender of women’s rights. She never argued in anger; but preferred to persuade others with her well-written arguments. Her wry and self-deprecating sense of humour comes through; and the film is often very funny.

This straightforward documentary unfolds in chronological fashion. Cohen and White deftly incorporate plenty of archival footage with candid interviews to give us this comprehensive and respectful look at Ginsburg’s life and legal legacy. The film also examines her personal life; focussing on her relationship with her loving and supportive husband Marty, himself a respected lawyer, who passed away a few years ago.

The film opens in striking fashion with a montage of angry, right-wing commentators denouncing Ginsburg as a “monster”, before slowly revealing her true nature as a judicial activist and champion of equality.

RBG celebrates Ginsburg’s life, her achievements and her passion for justice and equality. It’s well worth catching. The film hits cinemas ahead of the dramatized version of her life, On the Basis of Sex, which stars Felicity Jones as a younger Ginsburg.