King Kong and Godzilla move over. There’s a new kid in town. Let me put it this way: Rampage isn’t a gentle romantic comedy. It is a CGI-driven destruction-fest with The Rock providing an endearing link between a gigantic albino gorilla and humanity. 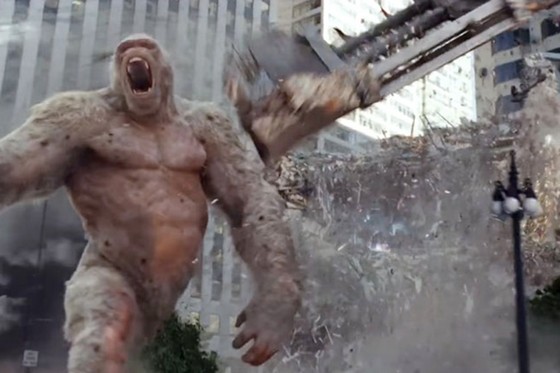 Primatologist Davis Okoye (Dwayne Johnson) oversees the ape habitat at the San Diego Wildlife Sanctuary. Although he keeps people at a distance, he shares an unshakable bond with George, the extraordinarily intelligent gorilla he has cared for since birth. But a rogue genetic experiment mutates this simian into a raging creature of enormous size. To make matters worse, other similarly altered animals – a wolf and an alligator – are soon discovered.

As these newly created alpha predators tear across North America, Okoye teams with a discredited genetic engineer, Dr Kate Caldwell (Naomie Harris), to try to secure an antidote. Okoye has to fight his way through an ever-changing battlefield, not only to halt a global catastrophe, but to save the fearsome creature that was once his friend.

Rampage is premised on a breakthrough technology, known as CRISPR. It gave scientists a path to treat incurable diseases through genetic editing. (While taking great liberties with the science, the CRISPR gene-editing program is, in fact, real.) In 2016, due to its potential for misuse, the U.S. Intelligence community designated genetic editing a “Weapon of Mass Destruction and Proliferation”. So, it is not hard to see why ruthless, greedy types would try to take advantage of the situation.

You could mount an argument that Dwayne Johnson plays the same character in every movie that he makes. He’s always that gentleman with a cheeky grin and faux seriousness from time to time – and, of course, the body of a goliath. He’s also the only one who does it as well as he does.

Here he’s given a run for his money by Jeffrey Dean Morgan. He plays a supercilious government agent who has a permanent grin on his face and certainly holds his own against the man-mountain. He just has heaps of fun with his role, playing it like a Texas Ranger riding in to town to clean up the bad guys.

So much of this film is just preposterous. But the fact that big mothers are running rampant is all that matters. The humour is hardly sophisticated; but it’ll resonate with the audience it was designed for.

Also, never mind that The Rock can communicate with the big ape – speaking for him, mind you – in sign language. It’s more important that the gorilla has his own sense of humour, and employs the rude finger to get a rise out of Johnson.

This is the third time director Brad Peyton has worked with The Rock and the relationship continues to flourish. Their earlier efforts were San Andreas (2015) and Journey 2: The Mysterious Island (2012). And they’re working on San Andreas 2.

Rampage is innocuous and a bit of fun. It’s unadulterated escapism, which you can forget about the moment you exit the cinema.