It’s nearly forty years since Sylvester Stallone first shed blood as Rambo, the former Vietnam veteran and special services soldier who ran afoul of a redneck sheriff in the 1982 film First Blood.
The character of Rambo was created by author David Morrell in the 1972 novel of the same name. The novel also explored the effects of PTSD on returning soldiers as well as examining the way in which Vietnam veterans were poorly treated on their return home from serving in a deeply unpopular war. The 1982 film adaptation, which starred Stallone and was directed by Ted Kotcheff (Wake In Fright), was a box office success and was influential in shaping the action genre for the 80s. The film version differed from the original novel in that in the book Rambo was killed by his former mentor Colonel Trautman in an effort to end the siege without further unnecessary bloodshed. But when the producers test screened the film, audiences responded that you can’t kill Sylvester Stallone, so they reshot the ending. This paved the way for a number of sequels that saw Rambo subsequently return to Vietnam to rescue some missing POWs, venture to Afghanistan and, in 2008, journey to Burma to rescue some missionaries. 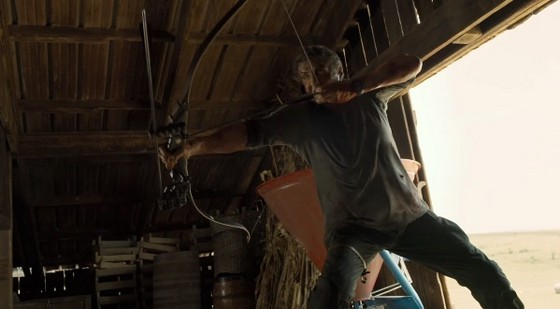 It’s been eleven years since then. Rambo has since retired from a life of violence and now runs his family’s horse ranch in Arizona. But he is still haunted by the memories of his violent past. He has constructed a labyrinthine series of tunnels underneath the property, which gives us a bit of insight into his mindset. He lives with his Mexican housekeeper Maria (Adriana Barraza) and her teenaged granddaughter Gabriella (Yvette Monreal). Gabrielle’s mother died when she was still very young, and her no-good father abandoned her not long after. Rambo has helped to raise her as a surrogate father figure.

Now the adolescent Gabriella wants to travel to Mexico to visit her father and find out the truth about why he abandoned the family. Despite Maria and John’s warning that he is no good she makes her way to a squalid, sprawling and overcrowded suburb in Mexico. When Maria arrives she is shunned by her father. Then she is abducted by a Mexican cartel and forced into working as a sex slave in one of their brothels. Rambo comes to Mexico to rescue her, which goes badly. The cartel follows him back to Arizona for a bloody confrontation that gives the film its exciting and testosterone-fuelled climax.

Stallone has written the script along with Matthew Cirulnick, and he captures the ultra-violent grindhouse aesthetic of the material. But the script itself is a bit of a mess, with some clunky and cliched dialogue, and some of the gruesome violence is troublesome. The villainous Mexicans are mere archetypes. Rambo: Last Blood seems to combine elements of action thrillers Taken and Sicario, and when Rambo wreaks havoc in a brothel it will remind audiences of Taxi Driver.

Director Adrian Gunberg (Get The Gringo) understands what the fans of this franchise want, and he basically delivers. The violence here is quite graphic and hard hitting as Grunberg depicts the damage that bullets and sharp objects can inflict on the human body. However, the body count is fairly modest when compared to the 238 confirmed kills from the 2008 outing. And it also lacks the more cartoonish quality of that previous film.

Stallone joins those other aging action heroes like Schwarzenegger, Bruce Willis and even Liam Neeson, who are still efficient and capably lethal. But he is now a weathered 73, and a little slower and not as agile, which brings a hint of vulnerability to the character who is no longer the macho one-man killing machine. He now has to rely on carefully planned booby traps rather than his special set of skills and brute strength to wipe out the heavily armed cartel hit squad.

Stallone has three successful film franchises now what with Rocky, Rambo and The Expendables. With the recent Creed Stallone successfully managed to reinvigorate the Rocky franchise and take the character in a new direction. A great montage over the final credits gives us some key moments from the previous films and reminds us of how the character of Rambo has changed over the course of the series from damaged war veteran to lethally efficient killing machine.

Rambo: Last Blood is the fifth in the series, but it is a largely unnecessary addition to the franchise. And as Rambo rides off into the sunset here it seems to bring the franchise to a satisfying conclusion.