A multi-faceted fight for justice, which tugs at the heartstrings, is the essence of the dramatic musical Ragtime. The timeframe is the early 20th century and the piece combines fictitious representative characters with historical figures such as Harry Houdini, J.P. Morgan and Henry Ford. It is a story of immigrants and African Americans facing adversary and racism. It is about privilege and workers’ rights.

Coalhouse Walker Jnr. (Kurt Kansley) is a talented Harlem pianist who has lost the love of his life, Sarah (Chloe Zuel), who has had a child with him out of wedlock. Tateh (Alexander Lewis) is a Latvian immigrant who has arrived in the US with his young daughter (Summer Hamilton in an alternating role with Annie Sainsbery), hoping to live the American dream, but is confronted by a nightmare. A third story thread concerns a well-to-do white family from New Rochelle, consisting of mother (Georgina Hopson), father (Adam Murphy), their little boy (Kempton Maloney in an alternating role with Hudson Sharp), mother’s younger brother (Finn Alexander) and the grandfather (John McTernan).

Also worth mentioning are civil rights activist Booker T. Washington (Joti Gore) and anarchist Emma Goldman (Sage Douglas). There’s also a showgirl, Evelyn Nesbit (Mackenzie Dunn) – involved in a scandal – that mother’s younger brother is besotted by. So, several stories cross over and come together to form a rich tapestry.

With music by Stephen Flaherty, lyrics by Lynn Ahrens and book by Terrence McNally, Ragtime is based upon a 1975 novel of the same name by E.L. Doctorow. It debuted in Toronto in 1996, before opening on Broadway two years later, claiming four Tony Awards, including Best Original Score and Best Book of a Musical. It appeared in the West End in 2003 and The Production Company’s endeavour marks its Australian debut all these years later.

One voice stands out above all others in the 30-strong cast – that of Chloe Zuel as Sarah, who is taken in by the matriarch of the rich family when she discovers Sarah’s abandoned baby. It is her rich vocal purity and crispness that is her distinguishing feature. She wows the audience.

Alexander Lewis makes a good fist of it as Tateh, the proud Jewish man who has an awfully hard time providing for his young daughter after their arrival on US soil, only for a chance encounter to change his fortunes. I also appreciated Kempton Maloney’s performance (he filled the role on opening night) as the “say it like it is” son of the white affluent family. He provides welcome comic relief. 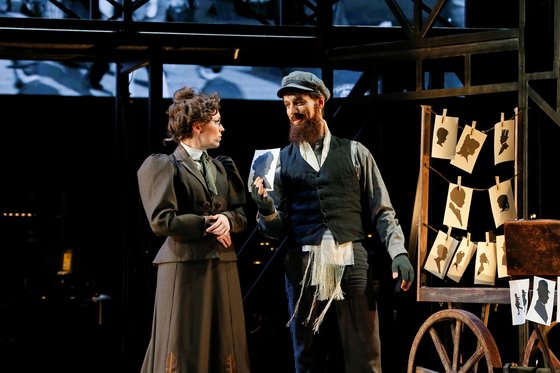 The staging is simple but effective – a dark metallic bridge, behind which the band is positioned and an evocative tableau of black and white photographs is projected to reflect the various locales in the story arc. Other features are the costuming, with elegant period detail by Isaac Lummis, and the striking lighting design by Nigel Levings.

Skilfully directed by Roger Hodgman, with musical direction from Guy Noble and choreography by Dana Jolly, Ragtime: The Musical is quite the epic tale of love, longing and loss. Given its strength, it is hard to believe that it has taken two decades to make its way Down Under. It is playing at State Theatre at Arts Centre Melbourne until 10th November, 2019.