What is truth and what is fiction? At times it’s hard to tell when watching Pvt. Wars.

It’s 1975 and three Vietnam vets have good reason to be housed in a mental institution. Their reality is a most unfortunate one. Perhaps there are moments of clarity among their delusions, but if so very few. The one who controls proceedings is a hillbilly called Gately (Indigo Parer). He seems to spend half his time trying to fix a broken radio. That’s when he’s not pacifying Silvio (Josh Massarotti), a “flasher” – sometimes aggressive, other times fearful – or having words with dorky, intelligent rich kid Natwick (Joseph Baldwin), whom Silvio doesn’t like.

They’ve returned to a world that doesn’t want them. They are just some whose bodies have been shattered and brains frazzled. While this trio is cared for by a nurse (Diana Puot) who occasionally looks in on them, most of the time they’re left to fend for themselves, teasing, tormenting and amusing one another. The story unfolds through small scenes, the men constantly interacting. Silvio even takes Gately on an unsuccessful “date” night, after Gately prevails upon Natwick to lend him appropriate clothes.

A large American flag dominates the stage, along with a photo of US President Nixon and – when that is removed – President Ford. Another framed poster from the time contains the words: “Do with less, so they’ll have enough!”, alongside a sexy shot of Raquel Welch. 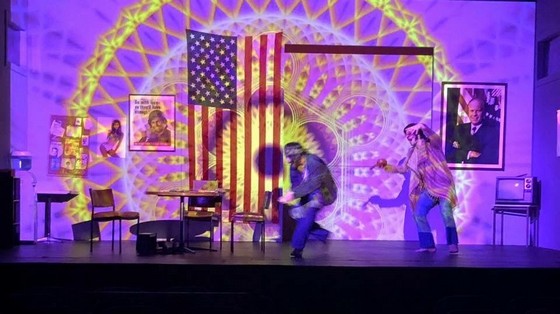 During frequent scene changes, on occasions we see black and white vision of troops and choppers and tanks, injured soldiers and the ceremonies that accompany those that didn’t make it home alive. The scars are apparent and the overwhelming feeling I got while watching events unfold was that of sadness, sadness of lives cruelled and crippled by a most unpopular war.

The script contains humour, but that humour is drawn from “madness”, because clearly these men are no longer the full bottle.

First appearing off-Broadway in 1979, the play has been presented by theatre companies around the world. It’s a vehicle to tackle the gut-wrenching themes of post-war psychosis, loneliness and fighting personal truths experienced by post-war veterans.

While very well performed, I felt there were too many scene changes. Back stage crew were seemingly scrambling  to move or add props every few minutes.

The plot, written by James McClure, didn’t go anywhere (it was circular), other than adding weight to the basic contention … and I didn’t feel that was enough. Further, Pvt. Wars was performed in two acts over the best part of an hour and three-quarters. A single act just over an hour would have served the material better.