Puttin’ on the Ritz is an all-singing, all-dancing affair with the occasional spoken interlude. Six vocalists and 10 dancers from London’s West End take us back to the Golden Age of Hollywood for a couple of hours. We’re talking about music from names such as Fred Astaire, Irving Berlin, George Gershwin, Cole Porter, Al Jolson – all of them before interval. In the second act, Judy Garland and the Cotton Club are on show.

A slick and polished production with gorgeous and plentiful costumes, I enjoyed what I saw. But I felt at times it lacked a certain naturalness. I got the impression that because this touring company had done the same thing so many times, the chatter in between the singing and dancing was well-worn. It sounded contrived. 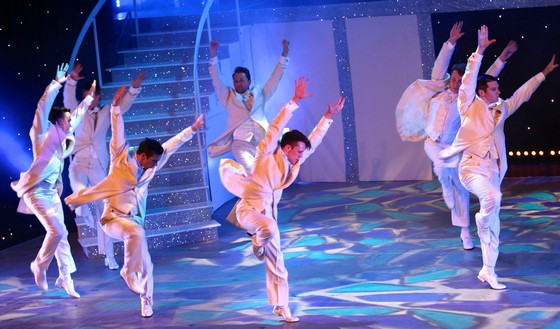 A number of the voices impressed me more than others. Some of the personalities were also more charismatic than others. Most were fine dancers in different forms, including classical, tap and the Charleston. Interestingly, the biggest single thing that stood out was the way the 16 ladies and gents were turned out. The gowns were elegant, sparkling and colourful – long flowing numbers, cocktail dresses and cheekier pieces. The men dazzled in top hats and tails, suits with long jackets and matching ties and more casual attire.

I lost track of the number of costume changes. I can’t recall any show I have attended with more. It became a case of wondering what they were going to come out in next.

From what I understand all the performers were assembled in the UK, included one proud Aussie who played up her roots. There were all kinds of combinations and permutations in delivering the much-loved songs – solos, duets, trios and big chorus numbers. The show swiftly moves through an impressive repertoire of crowd-pleasers.

Numbers include That’s Entertainment, I’ve Got You Under My Skin, It’s Wonderful, Anything Goes, Swanee and Puttin’ on the Ritz before the break. We hear There’s No Business Like Show Business, Making Whoopee, The Lady is a Tramp, Minnie the Moocher and I’ve Got Rhythm, to name but a few, in the second act. 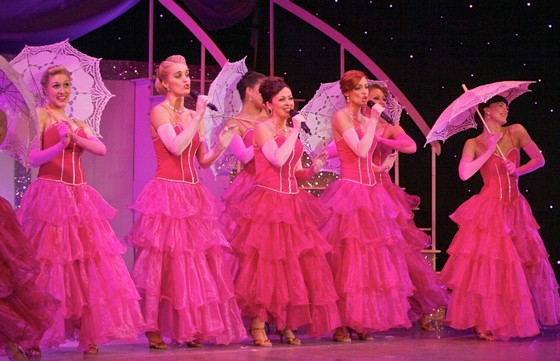 The audience largely lapped up the entertainment, on occasions even rising from their seats to applaud. There are no surprises. Puttin’ on the Ritz knows its target and plays to it. They certainly won’t be disappointed.

It is playing at the following dates and places: 20th June at The Events Centre, Caloundra, 21st June at The Star on the Gold Coast and 22nd June at the Queensland Performing Arts Centre in Brisbane. On 23rd June, it is off to Lismore City Hall in NSW before heading for WA, Bunbury Regional Entertainment Centre on 26th June, Mandurah Performing Arts Centre on 27th June and Regal Theatre in Perth on 28th and 29th June, 2019.