Being a teenager … trying to make your way in the world can be challenging and scary. So it is for this group of seven Year 12 students at a high achieving Stockport (a town near Manchester, where playwright Simon Stephens grew up) grammar school, who are about to sit their end of year exams.

A new girl – Lilly (Zoe Hawkins) – who has moved around extensively has just arrived and William (Ben Walter) befriends her the first day and takes an immediate shine to her. William has never had a girlfriend, but plucks up the courage to ask her out, only she rejects his romantic intent – gently. He has far deeper problems, including hearing noises in his head and lying. And Lilly is attracted to another student, Nicholas (Flynn Smeaton), who takes his studies seriously, works out and plays lacrosse.

Bennett (Karl Richmond) is somebody who doesn’t much care about anything or anyone. He is the class bully, who enjoys humiliating others. They include the class brainiac, Chadwick (Laurence Boxhall), who is deeply concerned about nuclear annihilation, and the “fat girl”, Tanya (Annie Shapero). Bennett’s girlfriend Cissy (Ruby Duncan) is used to getting straight As and is under pressure from her parents to continue to do so. Her objective is to escape her small-town existence.

The play covers an intense, short and stressful period in their lives. It also features dream and nightmarish sequences, with many of the scenes broken up by punk rock music. There is anarchy and discontent. Also, more positive attempts to move ahead with their lives and make a go of it. An eighth player (Jessica Clarke) makes an appearance late in the piece and she plays a psychologist.

Even before you enter the theatre, the scene is set with expletives, names and representations of genitalia in multi-coloured tape (red, yellow and green) emblazoned on the outer “skin” of the performance space. More than that, one of the crew is taped to a wall and the doorway in which we will enter is also barred by coloured tape. We immediately know we are in for quite a ride.

The performances are uniformly outstanding, each actor doing an excellent job capturing the essence of his/her character. In fact, individually and collectively they leave an indelible impression. Not all are good people, but it matters not, for it is impossible not to be impressed by the authenticity they imbue into their personas. I cite Richmond as but one example in representing a soon to be man child running off the rails. 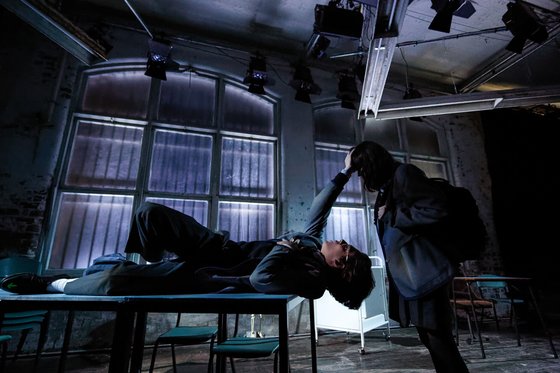 I admire the writing of Brit Stephens (The Curious Incident of the Dog in the Night-Time) and the crisp direction of Ruby Rees, which kept me involved and engaged throughout. There isn’t a dull moment even though the show lasts for 2 hours 20 minutes without interval. Staging in a confined space is another feature, with props such as desks and chairs moved in and around seamlessly.

Punk Rock examines youth disconnection and search for meaning and purpose without compromise. It is raw and gritty … and finishes with a bang. Previously there had been 13 productions around the world. Now it is playing at fortyfivedownstairs until 15th December, 2019.