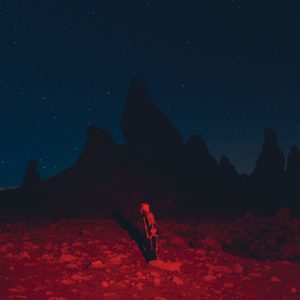 Phoebe Bridgers’ solo sophomore album arrives amid a growing demand for the young indie rock singer/songwriter. After the release of her debut, Stranger in the Alps in 2017, Bridgers formed the group Boygenius with Julian Baker and Lucy Dacus, releasing and EP in ’18 and then touring. In early ’19, the duo of Bridgers and Conor Oberst released an album under the band name, Better Oblivion Community Center, and performed on TV shows. Early this year, Bridgers sang on a single “Enough For Now,” from Ethan Gruska’s sophomore album, En Garde, and she co-produces her album here with Gruska and Tony Berg. And then in late Spring, she appeared, singing harmonies, on a single from The 1975’s latest album, Notes On a Conditional Form, “Jesus Christ 2005 God Bless America,” as well as three other tracks. And now, Bridgers drops her second album, bringing along many of her collaborators for the ride.

The album opens with a dark, swampy instrumental that lasts only a minute, mixing slowly picked electric baritone guitar and violin and dense bed of strings that folds likely into the album’s first single, “Garden Song,” carrying that dreamy quality right into the lyric that deals with the way our recurring dreams begin to shape the way we experience life, whether good or bad. “Everything’s growing in our garden,” she sings, “You don’t have to know that it’s haunted.” Bridgers’ lyrics often carry the extra weight of seeing the difficult and painful right alongside the good parts of life. In her break-up song “I See You,” she sings “I’ve been playing dead/My whole life/And I get this feeling whenever I feel good/It’ll be the last time.” The song describes the changes in Bridgers’ relationship with her long time drummer and writing collaborator once their romance ended, the lays it all out there in the lyrics: “I used to light you up/Now I can’t even get you to play drums/’Cause I don’t know what I want/Until I fuck it up/But I feel something when I see you now.” This song was originally titled “ICU,” but she changed it when that took on an even darker meaning due to the COVID-19 crisis.

Part of Bridgers’ appeal is that she captures these darker, at times a psychedelic lyrical mix of conscious and subconscious imagery, in often pleasant, bright sounding melodies. In the album’s biggest, boldest pop song, “Kyoto,” with its punchy rhythm and elevating horn chart by Nathaniel Wolcott of Bright Eyes, she sings about being on tour in Japan and killing time while regretting not being back with her people at home: “I’m gonna kill you/If you don’t beat me to it/Dreaming of Tokyo skies/I wanted to see the world/Then flew over the ocean/And I changed my mind.”

She’s able to capture the complex emotions many of us experience but rarely can verbalise, often capturing the schizophrenic ability of our minds to hold two thoughts at the same time. In her song “Halloween,” she imagines that “we can be anything,” but then reveals “Always surprised by that I do for love/Some things I never expect/They killed a fan down by the stadium/Was only visiting, they beat him to death.” In “Moon Song” she aptly describes the co-dependent nature of a relationship with someone who’s not healthy enough to love you back, while “Savior Complex” describes the one who enters relationships with broken people with the idea that they can save them. She writes, “Baby, you’re a vampire/You want blood and I promised/I’m a bad liar/With a savior complex/All the skeletons you hide/Show me yours, I’ll show you mine.”

Musically, “Graceland Too,” comes closest to echoing the folky roots of her debut, with finger picked acoustic guitar and banjo, where she reflects on a trip to Memphis a la Paul Simon, and her experience on taking ecstasy with friends, and this bit of awakening that “she knows she lived through it to get to this moment.” In the title track, Bridgers reflects on being an obnoxious fan stalking her musical hero, the late Elliott Smith, who bubbles over with enthusiasm but “Wouldn’t know where to start/Wouldn’t know when to stop.” And if many of her songs share the dream-like quality caught between everyday life’s strange little exchanges and the dark brooding sense of a dystopian apocalypse hovering just beyond this moment, she captures both vibes in the closing track, “I Know the End,” building at the end to a screaming nightmare of a conclusion, but finds Bridgers laughing as she catches her breath. The dreamy pop of Bridgers with its obsessive interest in honest expression, no matter how quirky feels like a perfect fit for these unusual times. Her music is the soundtrack for this age, and Punisher finds her and her musical friends striking just the right chord.