What a fantastic SF! Not because there are breathtaking space landscapes. Or because impressive, galactic battles are being fought. And you won’t see a collection of exotic-looking aliens. To be honest, everything looks pretty cheap. As if someone has searched through the props room of large film companies just to collect remnants of old fiction films. The spacecraft, a drop-pod, with which Cee (Sophie Thatcher) and her father Damon (Jay Duplass) land on an unknown, green, swampy planet, looks like an old decrepit, plastic garbage bin full of mechanical push buttons and levers with instructions under it in a foreign language. I immediately thought of the old Moulinex kitchen appliances that my mother used to use. And I briefly compared it with the first Star Wars film from the 70s. And also those old SF books from the library that I devoured as a young boy. Even the film poster resembled the cover of such a book. 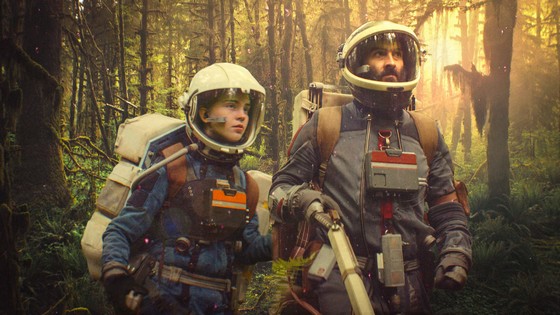 Perhaps it’s also because I was so fascinated by this imaginative universe the makers created. The limited budget meant that they had to be inventive and develop a sci-fi world with limited resources. An environment that doesn’t look earthly and where unknown techniques are used. To be honest, I didn’t really understand what it was about. What did Cee and her father have to harvest on this planet? Were the marble balls, called Aurelac, a source of energy? Or were they precious gemstones? No idea. But it was obvious that they are worth a lot of money. And that’s also the cause that wandering figures (apparently there are a lot of failing landing pods) try to steal each other’s crops. Cee and Damon experience this at some point when they encounter Ezra (Pedro Pascal) and his companion. And from then on it’s a struggle for survival.

I understand some people will say this is a slow film and that they’ll complain about the lack of action. No, this isn’t a film with heroic laser fights (even though there is an occasional firefight) and intergalactic chases. But if you succeed in empathizing with this strange world, as I did, then everything suddenly becomes more fascinating. At certain moments I found the dialogues between Cee and Ezra touching. And even though they are diametrically opposed to each other, there’s that sudden understanding and acceptance that makes them work together purposefully to flee this planet.

The setting where it takes place isn’t really unearthly. A swampy jungle, full of strange trees covered with mosses and giant ferns. Interspersed with reed-like landscapes where you expect a wild duck to fly by any moment. But these two characters, walking around in an old-fashioned looking space suit with a giant space helmet and a flexible hose connecting them, make it feel like science fiction. And there are also other minuscule details that ensure this. Such as the steampunk headphones Cee owns or the strange language she scribbles in her notebook. And when they come across a religious group that resides in an ordinary camping tent on this planet, you surely get the feeling that you are in a different solar system.

All due respect to Sophie Thatcher, who makes her debut on the big screen with this film. She played so naturally and relaxed that it didn’t look like acting. A mysterious teenager with a mysterious past. A girl who doesn’t know much about her past and apparently never had a real home in her life. The most surprising thing was how you see her grow up as the film progresses. A fantastic acting performance. The most colorful figure is that of Pedro Pascal. A kind of criminal type who sounds rude but he always uses such lyrical, verbally exaggerated language (sometimes difficult to understand). That way everything he asks or tells seems to be incredibly important. The chemistry between the two characters is what drives this film to the final.

Prospect is an intriguing film in which the use of interesting and inventive ingredients creates an exciting cocktail that leads to a strange, retro SF. The only thing the two connected (literally and figuratively) main characters want to achieve, is a safe return to the mother ship. And time is important, as they have to make that launch at a specific moment during the cycle. Perhaps the storyline is fairly simplistic. But in my opinion, this storyline fits perfectly with the minimalist view of this extremely successful SF film. This is definitely recommended for SF enthusiasts!