Between 1915 and 1923, the Ottoman Empire murdered some 1.5 million Armenian men, women and children in a systematic policy of genocide aimed at wiping out the entire population. It has been recognised as one of the worst atrocities of the 20th century. But when the history of WWI is written, this horrific episode is largely forgotten about, and successive Turkish governments have suppressed stories about the genocide, denying it ever happened.

There have only been a handful of movies made touching upon this controversial topic, including the 2004 film Ararat, from Canadian filmmaker Atom Egoyan, himself of Armenian descent. Ararat caused quite a controversy when released; especially with the Turkish government, which banned the film. 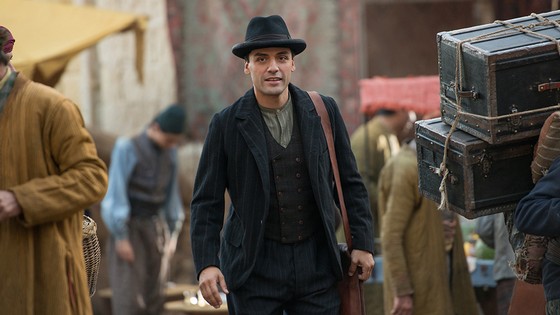 And now filmmaker Terry George delves into the episode in his new film The Promise. George wears his heart on his sleeve, and has tackled big subjects before, such as the issue of IRA hunger strikers in his 1996 drama Some Mother’s Sons and the 1994 mass genocide in Rwanda in his 2004 drama Hotel Rwanda. His powerful dramas dwell on some of the darker moments of history and man’s inhumanity to mankind, and he evokes a strong emotional reaction from audiences.

The Promise largely unfolds from the perspective of Mikael (played by Oscar Isaac, from Rogue One), an aspiring medical student from Armenia who leaves behind his family and fiancée to study medicine in Constantinople. He stays with his rich uncle in the city while studying. It is at the university that he befriends Emre (Marwan Kenzari, recently seen in The Mummy), the son of a powerful and wealthy Turkish official. His father however disapproves of the friendship. Mikael is more of a natural physician than Emre, who faints at his first sight of blood during an autopsy.

Mikael also meets Ana (Charlotte Le Bon, from The Hundred Foot Journey), who is the dance teacher for his uncle’s two children, and is attracted to her. But Ana is the girlfriend of Chris Myers (Christian Bale), an American photojournalist working for Associated Press. Myers is dedicated to bringing the truth to readers across the world. When war breaks out, Myers risks his life to report on some of the atrocities committed against the Armenian population by the Turkish authorities. For this he is arrested and charged as a spy.

When war breaks out, Emre uses his connections to gain an exemption from military service because he is studying medicine. He also bribes some officials to gain a similar exemption for Mikael, which earns the wrath of his father. Mikael finds himself arrested and placed into a labour gang. Eventually he manages to escape and return to his home village, which is where he gets caught up in the violent events. He also reconnects with Ana who is working to help refugees escape the persecution of the Turks.

The Promise was largely financed by Kirk Kerkorian, a billionaire businessman and former owner of MGM, who was of Armenian descent himself. This is a deeply personal project for all involved, and is a deeply harrowing and multilayered examination of this shocking episode of ethnic genocide. This is a slow burn film at the start, which makes the horrors and violence of the second half all the more powerful and disturbing. George handles the material with sensitivity, but he also brings muscle to the gritty and disturbing scenes of violence and action. The Promise has contemporary resonances as well given the current crisis in Syria and Iraq and shows that those who don’t learn from history are largely doomed to repeat the same mistakes.

The film was shot on locations in Spain, Portugal and Malta, and it has the sweep and epic feel of a David Lean film. The film boasts some lush production values and gorgeous cinematography cinematographer Javier Aguirresarobe, who is better known for his work on the Twilight saga and his work with Woody Allen.

The film works as a nice companion piece to Bitter Harvest, a film that looked at the deliberate policy of genocide by starvation that Stalin initiated against the rebellious Ukrainian peasants in the 1930s, another horrific crime against humanity that has largely been ignored. That film was let down by its rather bland romantic subplot; here The Promise also suffers from the prominence given to the romantic triangle between Mikael, Ana and Myers, which bogs the narrative down unnecessarily.

Writers George and Robin Swicord intertwine fictitious characters into the real events here. James Cromwell contributes a brief appearance as US Ambassador Morgenthau who clashed with the Turkish authorities, and most of the dialogue of their exchange was drawn from his own memoirs. George has attempted to remain faithful to the historical facts relating to the genocide. Isaac delivers a sincere and impassioned performance as Mikael, and he grounds the film. Bale brings a gruff quality to his performance here. The supporting cast includes Shohreh Aghdashloo as Mikael’s mother, and Jean Reno as a French naval commander who helps evacuate Armenians from the beaches while under heavy artillery fire from the Turkish army.