Along with Roger Donaldson’s 1977 political thriller Sleeping Dogs (which introduced us to Sam Neill), Geoff Murphy’s fast paced 1981 road movie Goodbye Pork Pie was one of the seminal films in putting New Zealand on the map and establishing the country’s modern film industry. Up until then the bulk of New Zealand productions were documentaries. Pork Pie is a crowd pleasing and fast paced remake of Goodbye Pork Pie, and somewhat ironically this new version has been directed by Matt Murphy, the son of the original’s director. Young Murphy even worked on the original as part of the crew. 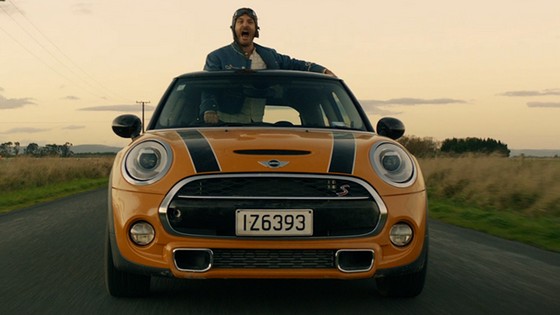 Luke (played by James Rolleston, whom we first saw in the wonderful New Zealand coming of age film Boy) is a getaway driver for a criminal gang, but he decides that he wants to leave that life behind. He sets off in a stolen bright yellow mini Cooper. Along the way he meets Jon (Dean O’Gorman, from The Hobbit trilogy), a sad sack loser and writer suffering from a serious case of writer’s block. Jon is heading towards Invercargill where he hopes for a reconciliation with his ex, Suzie (Antonia Prebble, from TV series Outrageous Fortune), whom he left unceremoniously at the altar. The mismatched pair also pick up Kiera (Ashleigh Cummings, from Home And Away, the forthcoming serial killer thriller Hounds of Love), a vegan activist who temporarily works at a fast food outlet.

There is a tangible chemistry between Rolleston and O’Gorman as they develop their odd couple vibe and play their contrasting personalities for laughs. There is also good chemistry between Rolleston and Cummings. O’Gorman brings a manic energy and slightly loopy quality to his performance as Jon, while Cummings brings a spunky quality and feisty attitude to her performance as the vegan activist Keira.

Part reimagining and part homage to the original, Pork Pie is basically a road movie and an elongated car chase and it seems inspired and shaped by some of those road movies from Hollywood like Eat My Dust, Smokey And The Bandit, and Vanishing Point. A highlight is the car chase through the streets of Wellington. Unlike the more recent instalments of the Fast and the Furious franchise though, here all of the car action and stunts are performed in camera without the aid of CGI effects, they are grounded in reality which adds an element of risk to the material.

Murphy hails from a background as an art director for films like Bread and Roses, and a highly regarded director of commercials. He makes his feature film directorial debut here, and maintains a fast past throughout. He has also updated the material to take into account social media and 24/7 television news broadcasts to follow the pursuit of the Blondini gang.

Editor Jonno Woodford-Robinson does a great job of maintain the energy during the high-speed action with his frenetic, kinetic cutting. The stunt work is also top class, but Murphy also puts a lot of effort into creating three dimensional characters that the audience comes to care about. The film is shaped by plenty of warmth and good natured humour. The action is accompanied by a soundtrack comprising New Zealand musicians, including Dave Dobbyn.

The film looks fantastic too, thanks to the widescreen cinematography of Crighton Bone (a regular collaborator with Murphy on his slick commercials), who captures the natural beauty of New Zealand’s wide open countryside. The film serves as a great tourist commercial for both the natural wonders of New Zealand as well as mini Coopers.