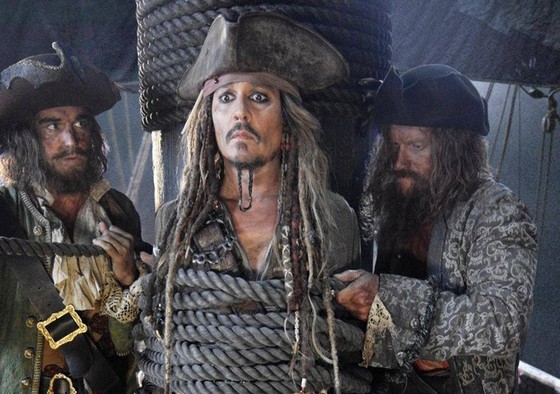 The focus of the series has been the reprobate pirate Captain Jack Sparrow (played by Johnny Depp) and his misadventures on the high seas. This time around Sparrow is enlisted by Henry Turner (Brenton Thwaites, from The Giver), the son of Orlando Bloom’s character, to find a mythical relic known as the Trident of Poseidon. The legendary artefact apparently has the power to reverse all curses, and Henry is desperate to find it and use it to rescue his father from his watery grave. Along the way he is joined by the feisty Carina Smyth (Kaya Scodelario, from The Maze Runner), a horologist who holds the key to interpreting “the map that no man can read”, which supposedly will reveal the location of the trident.

But Sparrow is being pursued by the vengeful ghostly Salazar (Javier Bardem). Once Salazar was a sea captain who tried to rid the sea of all pirate ships, until he was bested by Sparrow. For years, Salazar and his boat have languished in the Devil’s Triangle, a particularly nasty area of the sea that has caused the disappearance of many ships. A magic spell brings Salazar and his skeleton crew back to life and he sets out to wreak revenge on Sparrow. Also getting involved in the hunt is the scurvy old veteran sea dog Captain Barbossa (again played with scenery chewing relish by Geoffrey Rush).

The producers have brought in a pair of new directors to handle the $300 million production. Norwegian directors Joachim Ronning and Espen Sandberg, who are better known for the seafaring tale Kon Tiki, and they try to reinvigorate a franchise that had begun to grow tired. They inject a sense of fun into the early part of the film, although the later sections tend to grow a lot darker in tone. One of the highlights of this film is the early sequence in which Sparrow and his crew attempt an audacious bank robbery that is an excuse for some Buster Keaton-like physical slapstick comedy and pratfalls, clever stunts, and large scale destructive set pieces. There is also some humorous dialogue here that lightens the mood occasionally, although the ribald double entendres would not have been out of place in a Carry On film.

Depp’s performance as Sparrow has almost become a parody now, and the mannerisms, facial expressions and flair for physical comedy have become overly familiar as some of the same routines here are reminiscent of his turn as Tonto in the big budget flop The Lone Ranger. Bardem brings a hint of menace to his role as Salazar, although his mumbled dialogue often means he is hard to understand.

There are some great special effects here, especially the visual effects that animate Salazar’s ghostly crew. But the climax, which takes place underwater, is eventually overwhelmed by the CGI effects and somehow seems unnecessarily bloated. And the sound has been cranked up to almost deafening levels here.

The film was partially shot at the Movie World studios on the Gold Coast, and thus we get a few Australian actors including David Wenham, as an overly officious naval officer, and Bruce Spence popping up. Aging rocker Keith Richards played Sparrow’s father in an earlier instalment of the series, and here we get another famous British rock star to contribute a brief cameo as Sparrow’s uncle.