I walked into Peter Rabbit with low expectations about what Beatrix Potter’s beloved tales would look like on the big screen. But I left elated; and proud to be an Australian because so much Aussie talent was involved in this production. 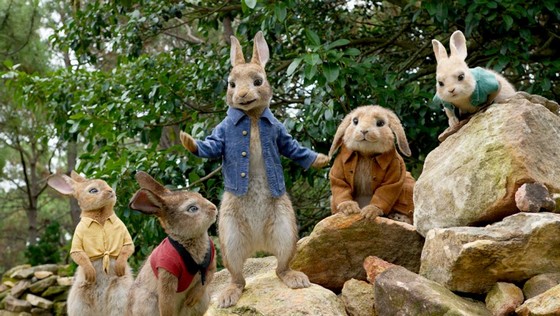 Old Mr McGregor (Sam Neill) can’t stand the thought of pesky rodents invading his precious vegetable garden and stealing his produce. He’s always ready to take drastic action. But Peter Rabbit (the voice of James Corden) has always thought the garden was fair game. He takes great pride and pleasure in outsmarting Old Mr McGregor. All that changes though when Old Mr McGregor kicks the bucket (a victory Peter is all too happy to claim for himself).

Initially the garden becomes a virtual free for all for Peter and friends. But then Old Mr McGregor’s great nephew Thomas McGregor (Domhnall Gleeson) arrives, having inherited the place. Thomas isn’t about to stand for Peter’s antics any more than Old Mr McGregor did; but in Thomas’ case his arsenal is far more dangerous. The delightful rabbit-loving Bea (Rose Byrne) is always on the rabbits’ side; but will her support be enough?

This isn’t the relatively genial version of Peter Rabbit I was anticipating and nor is it merely a kids’ film. Rather, it’s a very cleverly conceived and executed family comedy that has something for all generations. It’s funny and mischievous. The seamless integration of live action with animation is as good as I’ve seen. You’d swear that Peter Rabbit and his family are alive.

I love the fact that Peter is a deeply flawed hero, who regularly mucks up. The physical humour that abounds reminded me of Home Alone. Above all, I was impressed by the irreverence of the storytelling. This is a film that doesn’t signal its punches, as so many do. It surprises and delights. An example of that is a rooster who’s incredulous at the repeated breaking of dawn. That’s just one of a number of ongoing sight gags.

The voice talent is tremendous and Rose Byrne (Bad Neighbours) and Domhnall Gleeson (Brooklyn) are well cast as the leads.

Co-writer and director Will Gluck (Friends With Benefits) gives Peter Rabbit an endearing “X” factor that elevates it above the ordinary. So much so that it’s a film that you can see more than once. I already have.