“If at first you don’t succeed, lie, lie again…”

The characters of Perpetual Wake churn out lie after lie when challenged, as effortlessly as they stomp and strut all over the stage, diving in and out of the present and of the fictional world of a novel that may or not be the next greatest literary release. It all depends on who might be willing to write it a favourable review. 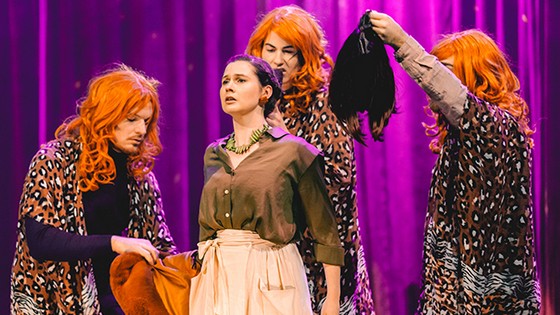 Fiona West is a social media influencer who is in possession of a thumping great secret. This secret is kept well away from her 150,000 followers, and it’s a corker.  Fiona has written a novel, and it is a contrived meeting between Fiona and old school ‘print’ reviewer Paul Creel that may make or break ‘Perpetual Wake’, enabling Fiona’s book baby to either soar into bestselling skies or sink into the murky and well represented ranks of forgotten releases. Paul is quite determined that nothing shall influence him – least of all a social media influencer – and herein lies the problem.  Paul is married to a successful romance novelist, Bernice, who appreciates the money and the accolades but has a peevish little voice in her ear telling her that her success was not well earned.  That voice may well be that of her husband.

Perpetual Wake is a lively four-hander that will have the theatre-goer doing more than one double take, as the stage often seems populated by more than just four actors. All deserved pats on the backs for doing a sterling job of not actually poking each other in the eyes with their antlers (and not hooking themselves up with them on the curtains).  Another thing the four did not lack was energy. Bags and bags of it was needed to pump out the necessary levels of jolly verve required by a whip-smart script of punchy complaints and comeback. These pivots were hilarious, with audience appreciation heard immediately after.

As always with actors playing multiple parts (inner selves, alternate selves, leaping metaphorical representations and what have you), there is busy work required to keep the audience clear as to which character they are hearing and seeing. The swift changes between characters and their alternates needed clarity, as the lines of delineation were not distinct.  The appearance of the ‘Stag’ (antlers were an interesting aspect to keep track of) were not always clear as to the purpose of their inclusion – was the stag representing the focal actor’s conscience, or appearing as needed to mark territory?  The transitions were often abrupt and puzzling. 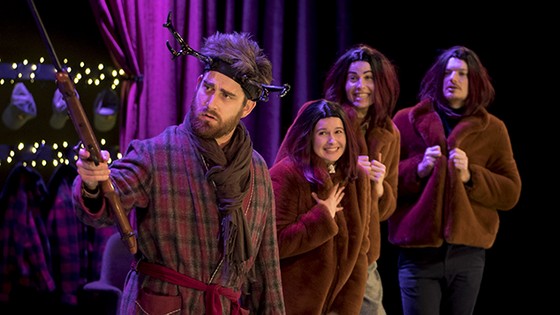 As much as Perpetual Wake was injected with lot of gloriously indulgent gestures, lavishly overdone emotion and try-hard snappy dialogue, it did become predictable. We knew how it was all going to end. Comedic glitter sprinkled amongst, mostly in the capable hands of Stag, largely carried the audience through from scene to scene.  Some interactions, such as a chair sex scene, were puzzling as to the intent of their inclusion. There was a definite true crime podcast vibe to the scenes of Molly and Brack (the two book characters) as they drove moodily through the darkness, verbally pushing and shoving at each other, shotgun at the ready, the endless night road in front of them – the audience in their headlights.

The audience, going by the foyer conversations afterwards, was a bit ‘in the wilderness’ as to the intent behind this very active piece.  If you like to leave live theatre wondering what on earth it was that you just witnessed, Perpetual Wake should give you plenty of thinking fodder for the drive home and for text conversations with your theatre partner over the next day.

Written by Gita Bezard and Jeffrey Jay Fowler, Perpetual Wake is a production from The Last Great Hunt, a collective of Perth-based theatre makers. Perpetual Wake is performing all week at the Subiaco Arts Centre at 7pm until 7 September 2019. Tickets can be purchased through ptt.wa.gov.au.