Well, the last Mary Rachel Brown play I saw in Sydney was Silent Night for the Darlinghurst Theatre Company late last year. It was a disaster. Approaching another evening with Ms Brown was a tentative commitment. However, I can say, it was worth taking a punt, for the experience was a better one. Permission to Spin, a taut 61 minute one-act, was as different to Silent Night as day is to night.

It’s interesting to see that Ms Brown has followed, perhaps, the model of other writers, such as Harold Pinter and Edward Albee. They feared the director’s misapprehension of their writing. So she has taken the director’s reigns herself – declaring, perhaps, “This is how my play works. Pay attention.” Although, to help, Dino Dimitriadis is registered as director, too (he is also one of the producers), and Matthew Cheetham is recorded as a co-director. Three directors to prepare this ‘dish’! 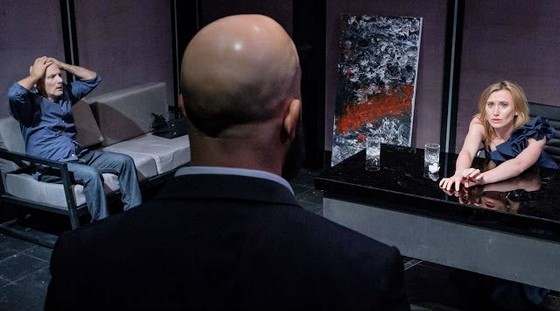 Mind you this trio of directors began well with the choice of a cast, Yure Covich, Anna Houston and Arky Michael. They’re three actors who have, individually, the ‘chops’ to tackle any text, and, collectively, the ‘chemistry’ to pull it off. They do.

Cristobel, aka Miss Polkadot (Anna Houston), is about to receive, an award for Children’s Album of the Year. She has a global franchise deal which would result in all her team becoming wealthy. At a meeting prior to the ceremony, Jim (Arky Michael), her agent, and Martin (Yure Covich), her producer, are both high as kites on a cocktail of cocaine, whiskey and adrenaline. This is the ‘norm’ it seems for this industry, as Ms Polkadot, also imbibes. But a problem arises when Cristobel threatens to reveal her retirement in her acceptance speech. It’s a protest against her music being used to facilitate torture by aggressive governments. One of her songs is on a 24-hour loop at a loud volume, causing disintegration of the minds of prisoners.

Escalating mayhem ensues as debates on ‘ethics’ between art and power (money). They become the mask for what many of us might project as a struggle among the greedy in the chaos of capitalism; the promise that more is better. That’s until the demise of one of them halts the verbal and physical gymnastics. We are crashed into a black-out, a warm spotlight follows, and the ‘demised’ gives an epilogue of pathos, that is about real things – too late, too late, poor ‘thing’.

The three actors hoisted into the stratosphere of a very ‘upper’ drugged state by the writer, perform to elicit a clarity for their character’s arguments whilst illustrating the given circumstance of their writer’s world with great alacrity – it is a fine high wire act of finding the right balance to keep it all a perceptibly rational experience for the audience. These three actors find a joint ‘agreement’ between themselves to keep this play afloat, for this is a Mad, Mad, Mad, World, indeed. There is wit in the writing if not many outright laughs as this world is so bizarre that it kind of inhibits permission to spin with them – perhaps an offer of a cocaine whiff for each of us could have helped, as Martin often reiterates to the others, “You must participate if you want to stay in the room.” (I paraphrase.) 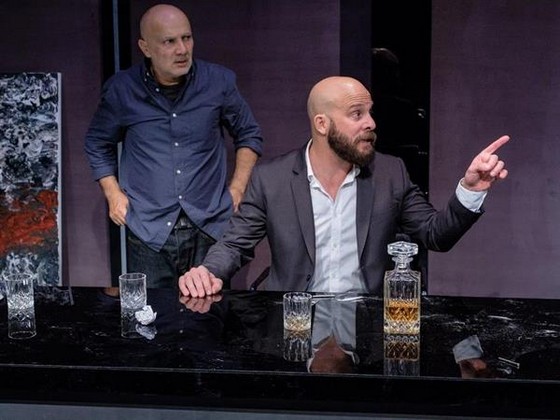 A set design from Cris Baldwin, a grey dampening environment with black mirroring, and neat, real costumes, by Isabella Cannavo, that disintegrate as the hour passes, are suspended in a spotty lighting design by Veronique Benett.

This is a brisk evening in the theatre and an intense one – one is left a trifle exhausted. The content concerns of the play feel a little dated (though no less relevant) and one ponders just how long ago was this play ‘born’? Ms Brown has written her play, whenever it was,  and shows how it should be done.

Apocalypse Theatre Company, in association with Red Line Productions, are presenting Permission to Spin at the Old Fitz Theatre, Woolloomooloo until 28 July 2018.