Jennifer Garner returns to the big screen in Peppermint. This by-the-numbers crime actioner features a vigilante seeking revenge. I counted one surprise in the entire film. 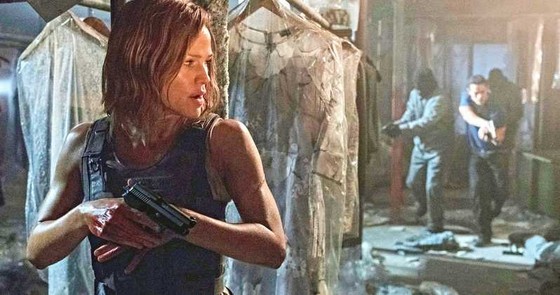 The criminal justice system fails Riley North (Garner). She and husband Chris (Jeff Hephner) have a 10-year-old daughter, Carly (Cailey Fleming). While they may be struggling to make ends meet their lives are filled with love. A shady friend presents Chris with an opportunity to grab some quick cash. At first he takes it up, but then at the last minute backs out. Too late – because his brief flirtation with the criminal underworld leads to a deadly retaliation.

While out celebrating Carly’s birthday, she and her father are viciously killed in a drive-by shooting. Riley is critically injured. After waking from a coma, she’s ready to identify the shooters and clings to the belief that justice will be served. Regardless of her eyewitness testimony though, the drug cartel’s influence is far-reaching in a corrupt system. With so many on the take, justice never stood a chance. Something inside Riley snaps as she watches the killers go free. She goes into hiding and spends the next five years preparing to extract revenge.

This is “one woman against the world” kind of stuff. Somehow, although frequently wounded, she manages to get up and get on with the business of killing the bad guys, often handfuls at a time. Credibility? Forget it – you won’t find that here. Ditch thoughts of subtlety or nuance. They simply don’t rate a mention in a film such as this … and arguably nor should they. Still, a few more twists wouldn’t have gone astray.

The writer is Chad St. John, one of those credited for a similarly underwhelming action thriller in London Has Fallen. Pierre Morrel, who also seems to specialise in this sort of fare, directs.

If not for Garner and strong production values (the film looks good), Peppermint would be a straight-to-video release. Nevertheless, I suspect there will still be an audience of 18 to 25-year-olds who may appreciate the material more than I did.