Patrick is a British comedy celebrating our love of pets. It’s told through the eyes of a young woman whose life changes when she unexpectedly inherits her grandmother’s pampered pug. 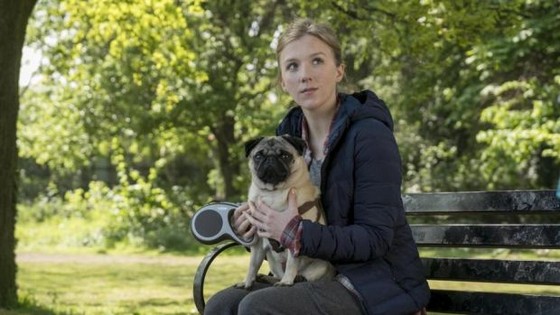 That woman is Sarah Francis (Beattie Edmonson). Her partner has just called it quits on their relationship. She’s about to start a new teaching job when her granny passes away. In short, her life is a bit of a mess. The last thing she needs is someone else to look after; let alone someone who dribbles, snores and eats from the kitchen bin. But like it or not, granny has bequeathed her a very spoiled pooch by the name of Patrick. Surely she must have had her reasons? Apparently not, as this four-legged interloper proceeds to cause chaos in all aspects of Sarah’s life. But before too long something remarkable happens. Patrick, with all his stubby, stumpy attitude, begins to turn her life around …

Patrick is a shaggy dog story that feels like a telemovie from days gone by. The story is awfully contrived; while the plot is wafer-thin, with just the odd twist or turn. I can’t say it’s all that credible but I cheered for the underdog (no pun intended) Sarah, who’s perpetually unlucky in love.

The film also takes liberties with reality. Probably the most glaring of these is how some bratty kids Sarah is teaching suddenly turn into angels from one scene to the next. Still, the settings are glorious; and the film is very good to look at.

As for the pug at the centre of the story, he’s cute enough but he doesn’t play as much of a part as I thought he may have. I suppose more than anything else, there are no surprises in what the pooch does and that was a tad disappointing.

It’s one of those films you could watch on a rainy day, if you had nothing better to do.

Patrick is now streaming on Amazon Prime; and available to rent or buy on Google Play, iTunes and YouTube.