Superb, power-packed performances are the hallmark of Paris: A Rock Odyssey. This dynamic concert tribute is a version of a show co-written by the late, great Jon English (who passed away in March 2016). His son, Jonathan, is in the orchestra and the last number specifically acknowledges Jon, with a large full-screen video headshot being the backdrop. Before that, the 19-strong cast and 28-piece chorus, together with the orchestra, have already – and quite justifiably – taken their bows to a standing ovation.

To the best of my knowledge, this is the first fully professional staging of Paris: A Rock Opera, which English spent three years writing with David Mackay (who produced English’s album Some People …). I can’t fathom why it has been such a hard sell because the story of the Trojan War is compelling and the music is sensational, often bold and evocative. 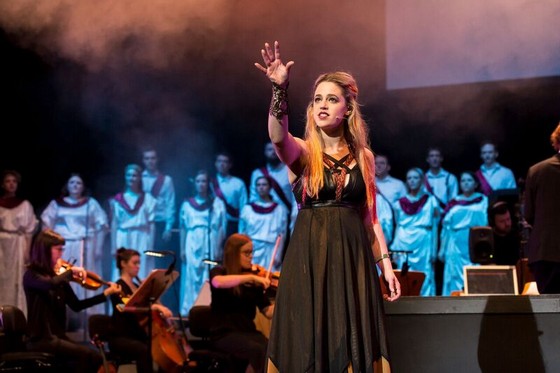 Paris, a love story drawn from Greek mythology, began as a soundtrack before its amateur theatre debut in Sydney in 2003 and Melbourne in 2004. That is when English released the musical’s amateur rights to Stella Entertainment, now Music Theatre Melbourne.

The double CD of Paris: A Love Story was recorded in London and released in 1990. It sold more than 50,000 copies and won the 1991 ARIA music award for best original soundtrack. It featured Jon English in the role of Hector, along with with John Waters, Barry Humphries, Philip Quast, Doc Neeson, John Parr, Sheila Parker, Joe Fagin, Demis Roussos, David Atkins and Terence Donovan. It was backed by the London Symphony Orchestra and London Philharmonic Choir.

Directed by Neil Gooding, with musical direction by Isaac Hayward, Paris tells the tale of the forbidden passion of the title figure, Paris the Prince of Troy; and Helen, the Queen of Sparta. It was a love affair that sparked the Trojan War and inspired the fiendishly brilliant idea of creating a giant wooden horse full of warriors to infiltrate the city of Troy.

The Greeks waged war against Troy after Paris took Helen from her husband Menelaus, the King of Sparta. The war is one of the most important events in Greek mythology and has been narrated through many works of Greek literature, most notably Homer‘s Iliad.

The two female leads – Madeleine Featherby (Follies) as Helen and Kerrie Anne Greenland (Les Miserables) as Cassandra – in particular are vocally at the very top of their craft, a privilege to listen to. They manage to stir the soul. 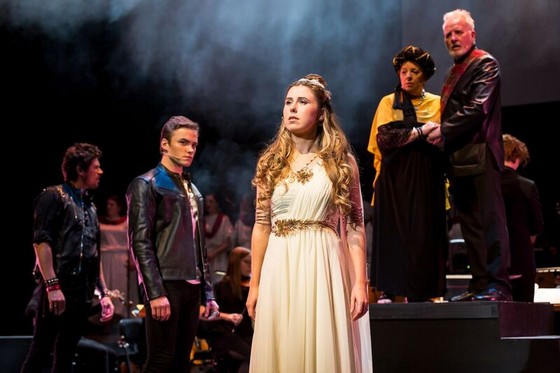 Taking the lead role is Matthew Manahan (Cabaret). Others in the cast include Scott Johnson (Jersey Boys) as Hector, John O’May (Godspell) as Priam and Mark Dickinson (tick, tick … BOOM!) as Menelaus. Ben Mingay (Jersey Boys) is Achilles and Tim Freedman (lead singer of The Whitlams) Agamemnon. The evergreen and ever reliable John Waters (Hair) continues to impress, this time as Ulysses.

A faux drunken number by Brian Mannix (of The Uncanny X-Men) as Sinon in the second act is among this production’s many highlights.

I would love to think that the audience’s effusive reaction to what is truly a wonderful show will provide the necessary impetus to see a full-scale theatrical production staged in the very near future, for it is richly deserving. This Jon English concert tribute at the acoustically majestic Melbourne Recital Centre only has four performances, including a matinee on Saturday, 15th July, before closing that evening.