It’s one of those vagaries of film distribution that we sometimes get two films released at the same time with similar plots and ideas. Within the space of a couple of weeks we get two road trip movies. Both feature two people on a journey through some of Europe’s most picturesque areas. They sample the history, culture and food of the region as they travel. One is the hilarious upcoming The Trip To Spain, the third film in the series featuring Steve Coogan and Rob Bryden. The second is the rather slight and cliched Paris Can Wait. 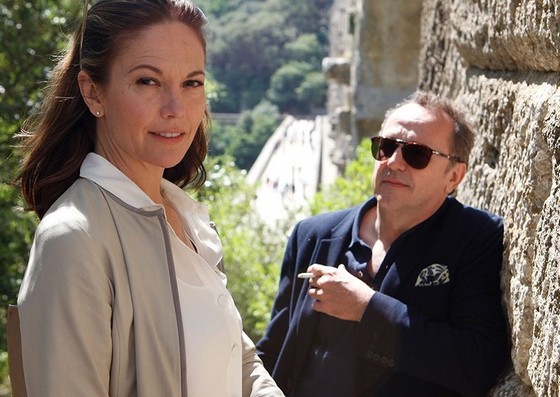 Paris Can Wait is the debut narrative feature film from Eleanor Coppola, the 80-year-old wife of Oscar winning filmmaker Francis Ford Coppola. She’s better known for her work in documentaries, like Hearts Of Darkness: A Filmmaker’s Apocalypse, which documented her husband’s trials and tribulations while filming his epic Vietnam War drama Apocalypse Now in the Philippines. She has also made a couple of making of short documentaries about a couple of his other films. Paris Can Wait is loosely inspired by her own experiences accompanying her husband to Cannes in the ’70s. While he was tied up with business talks and deals, she took a trip to Paris. But just where fact ends and fiction takes over, Coppola leaves to the audience’s imagination.

Anne Lockwood (played by the always reliable Diane Lane) and her film producer husband Michael (Alex Baldwin) are in Cannes for the annual film festival. He has to fly to Budapest for discussions about a forthcoming film project. Because of an ear infection, she is unable to fly. So rather than accompany him, she decides to take a train to Paris and wait for him. However, Michael’s business associate Jacques (Arnaud Viard) offers to drive her to Paris. They head off in his vintage blue Peugeot.

But what should be an eight-hour drive turns into a leisurely two-day journey. They roam through the sights of regional France as Jacques takes a scenic detour. The roguish Jacques is the quintessential Frenchman, full of Gallic wit and charm, joie de vivre, and a huge appetite for life and sophisticated tastes. But it soon becomes clear that Jacques also hopes to sleep with Anne along the way. For her part Anne is flattered by Jacques’ attention, something she doesn’t get from Michael. Jacques becomes something of a sounding board for her frustrations. She enjoys the road trip, the historical sights and the food and wine along the way. She also enjoys the banter, and although she slowly warms to Jacques’ company, she is wary of his motivations.

Paris Can Wait is essentially a two-hander that serves us many of the usual clichés of the road movie. It is something of a journey of self-discovery for Anne. The film also explores the unworldliness of the American abroad; as well as French culture. The film has been handsomely shot by cinematographer Crystel Fournier (Girlhood). There is some great scenery of the French countryside, the rolling green fields and hills, the historical sites, and plenty of swank hotels and restaurants.

But the slight narrative – which apparently took six years to write – is a little too cliched and Coppola’s pacing of the material is uneven. Coppola maintains an unhurried pace, and a light touch throughout, but the film never really moves out of first gear. The flirty dialogue between the pair is ripe with innuendo, but lacks any real zing or insight.

Lane, who has gone the scenic route before in films like Under the Tuscan Sun, is good here – she has a warm and likeable presence. She brings a relaxed charm to her performance, but she also reveals Anne’s vulnerabilities and fears. Although Jacques is a slightly sleazy character, Viard manages to infuse him with a slightly sympathetic edge and wit. Alec Baldwin is good in a small role as Anne’s driven and distracted film producer husband.

The film gives audiences the vicarious pleasure of travelling through the gorgeous countryside of France; but basically you can’t wait for the journey to come to an end. Lane does solid work here, but is let down by the lacklustre script and a lack of emotional engagement with the two central characters. With a name like Coppola behind the camera you would have expected a work of more substance.