When I wrote about Burning earlier this year, I mentioned that East Asian cinema was having something of a “moment”. Well, that “moment” continues with Joon Ho Bong’s Palme d’Or (2019) winner, Parasite.

A veteran of Korean cinema, Bong is probably best known here for 2013’s Snowpiercer. Sci-fi has been his forte, so Parasite is something of a change of pace for him. This is a family drama wrapped in a psychological thriller with some horror elements thrown in. It shares some themes with 2018 Palme d’Or winner Shoplifters from Hirokazu Kore-eda; but Bong makes the film distinctly his own. 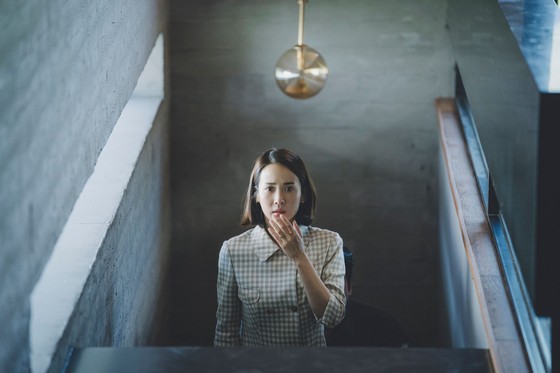 In contemporary Seoul, Ki-taek (Kang-ho Song) lives with his family in a “semi-basement” – a flat with windows above street level to let in light, but with a floor below ground. Ki-taek; his wife Chung-sook (Hye-jin Jang); daughter Ki-Jung (So-dam Park) and son Ki-woo (Woo-sik Choi) are all unemployed. The family eke out an existence doing menial jobs like folding pizza boxes. But Ki-woo catches a break when a friend (Seo-Joon Park) announces he’s travelling abroad. He wants Ki-woo to take over his job as an English tutor for the teenage daughter of a wealthy family; even though Ki-woo doesn’t have the required qualifications. Ki-woo eventually agrees and, with Ki-Jung’s help, fakes up the paperwork. At the interview, Ki-woo ingratiates himself to the girl’s mother, Yeon-Kyo (Yeo-jeong Jo). The girl herself, Da-hye (Jung Ziso), seems quite smitten with Ki-woo. Soon Ki-woo is visiting the family’s architect-designed house several times a week.

But Ki-woo isn’t the only resourceful one, and soon all the family members are employed (by tricking the gullible Yeon-Kyo) in the household. Yeon-Kyo’s husband, Mr Park (Sun-kyun Lee) is a successful tech entrepreneur and doesn’t seem to mind his wife’s spending. Neither of them realise that the four people they’ve employed are related. When Mr Park’s family go camping for the weekend, Ki-taek and his family decide to live it up in their house. But an unexpected discovery will change everything.

Bong and co-writer Jin Won Han have crafted an intricate, layered screenplay. At various points, the characters mention how “metaphorical” things are – a sure pointer to the many metaphors lurking in the story. The story works on both “macro” and “micro” levels. It explores a big theme of wealth disparity; but still works as a small family drama. Moments of rare beauty counterpoint moments of degradation. One critical scene emphasises the metaphorical distance between the two families by stunning use of physical distance. Bong keeps the action flowing, ensuring there’s not a dull moment in the entire film.

And the title might get you thinking. Who exactly is the “parasite” here. Is it the family of fraudsters? That would be the easy answer, but maybe it’s a bit obvious. Or perhaps it’s the wealthy Mr Park whose fortune possibly derives from exploiting others. Could it be someone else? Could it be something else? Bong gives you so much to dig into here, a second viewing may be warranted.

Kang-ho Song leads a pack of great performances. Many of the actors worked on Bong’s earlier films and that bond no doubt helps the fim’s easy flow. If I had to single anyone out, it would be Yeo-jeong Jo as the slightly clueless Yeon-Kyo. Her performance takes the character on a sweeping arc.

Parasite is yet another exceptional film from Korea. Its win at Cannes was no fluke. This is brilliant cinema that deserves to be seen. Seek it out!