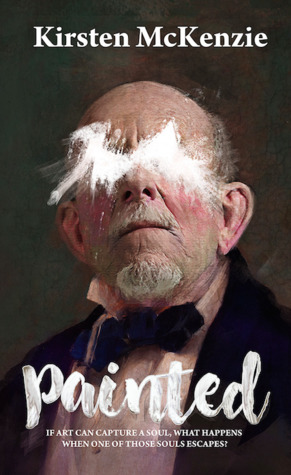 Horror isn’t a sub-genre I spend a lot of time reading, so Painted, being a mystery with a horror overlay, wasn’t a book that came with much in the way of preconceptions or expectations. The premise is that when an extremely reclusive artist instructs a law firm on the manner in which is vast art collection is to be distributed after his death, it turns out that the original lawyer that Kubin was used to dealing with has also died. The firm is now run by his arrogant, money-hungry son, who decides that the instructions from his client aren’t worth bothering with. There’s a much cheaper, more expedient way of handling things – send in the assessors and get on with it. The problem with that is that the instructions include a number of “safety measures”, that aren’t passed on, and therein lies all the trouble.

Set in the classic big, dusty, dark house in the middle of nowhere, the action centres mostly around art appraiser Anita Cassatt who is uncomfortable in the house from the moment she steps into it. There are portraits everywhere, each painted eye watching, and Anita is wrong-footed by that and the building sense of menace. Not knowing that there was safety measures means she’s not even aware of the potential of the threat from the very beginning. All of which sets up some horror elements that feel like exactly what is expected. Helped by a setting which comes straight from the classics of horror movies (I can’t remember the name of the category and googling to find it threw up a genre series of horror movies under Leprechaun and I’m now so distracted I’ve forgotten where I was…).

Oddly enough, Painted does comes across as a bit of fun in some ways, although the tension is palpable and the ramp up of threat maintained right from the outset. Not being a reader of horror styled novels I’m not sure whether the classic end of episode portend is a standard feature, but early on in the book there’s quite a bit of that going on. I suspect that Painted has much that will appeal to fans of that style of book.