Frozen meets Shrek in Onward, the latest adventure from the Disney-Pixar stable. The hype around this film has been understandably muted; but even though it’s a little “off”, it still delivers exactly what most audiences will want. 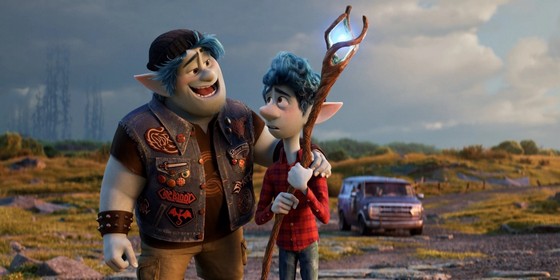 Like Shrek, the Onward is set in a kind of split dimension in which the world of fantasy has intersected with current reality. The prologue describes how a world of enchantment inhabited by fairies, dwarfs and elves fell in the wake of scientific discovery. It was just a whole lot easier to flick the switch on a light bulb than to conjure up a demanding light spell. So now, the magical world looks a lot like suburban America, complete with trash unicorns. Yes, I said thrash unicorns – and they’re kind of scary. The Lightfoot family live in this rather humdrum setting. Elf mum Laurel (voiced by Julia Louis-Dreyfuss) has her hands full with two growing boys – Ian (Tom Holland) and Barley (Chris Pratt) – since her husband passed away. Ian is quiet and thoughtful; but Barley is loud and reckless. Barley is into role playing games, and approaches the world like it’s a game board. It’s Ian’s 16th birthday and things aren’t going great for him. But a special gift from his late father will set the boys on an epic journey – in a beat-up van named Guinevere.

As you might guess, the film plays out like one of Barley’s games, culminating in an immense boss-fight. But the film’s emotional heart is revealed after all the questing and bravery is done – like Frozen – and it ends up in a similar place to Frozen.

Onward certainly works best when it plays to its comic strengths. Director Dan Scanlon and his writing team (Scanlon himself, Keith Bunin and Jason Headley) create some wonderful characters, particularly the (once) fearsome Manticore (Octavia Spencer) and Laurel’s centaur boyfriend Colt Bronco (Mel Rodriguez). The film takes a little while to get going, but once the brothers hit the road, it’s a rollicking ride. The emotional journey (which hides in the background a little until the emotional finale) is apparently based in Scanlon’s personal experience. Even so, it felt very manipulative.

Props go to production designer Noah Klocek and the design team who have crafted a thrilling world design for the characters to move through. Its melding of the prosaic and fantastic is just about perfect. And appropriately, the stirring score is from brothers Mychael and Jeff Danna, who collaborated on the score for The Addams Family (2019)*.

The thing about Disney-Pixar is that their track record is so amazing, anything less than extraordinary feels a little disappointing. Onward is a good move. It’s just not a great movie like Up or Inside Out. It however more than stands up to much of the “family” entertainment available in these locked-down times. It’s definitely worth checking out.

*This rather under-sells the multi-award winning Mychael Danna, who won an Oscar for The Life of Pi (2012).

Onward is now available to buy digitally in most places you buy digital movies (Google Play, Apple TV, PlayStation Store, etc). It will be streaming on Disney + from 24 April 2020.