What would you like to see more of on television? If you said, “Kirsten Dunst, shoulder pads and aquarobics”, then do I have the show for you. On Becoming a God in Central Florida will scratch all those itches – and a lot more.

The show – created by relative newcomers Robert Funke and Matt Lutsky – ostensibly explores the world of MLMs. That’s multi-level marketing schemes – the barely legal cousins of Ponzi schemes. Think Amway and you’ve got a pretty good idea. But while the show certainly shines a spotlight on the questionable practices associated with MLMs, it’s actually more interested in what drives people to become part of them. Desperation, naivete, and plain old greed all play a part. The greed element isn’t just about money though, it’s about power; something the show revels in examining. 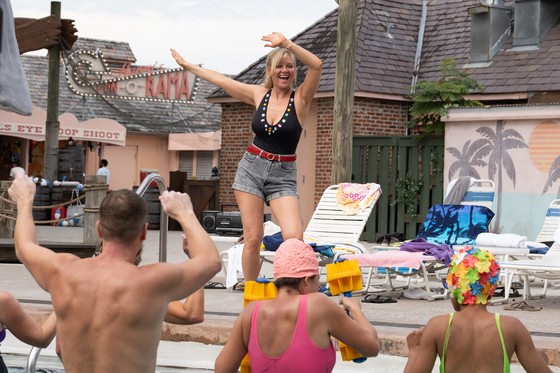 The central character is Krystal Stubbs (Dunst). She works a minimum-wage job at a Florida water park. Her husband Travis (Alexander Skarsgard) is in insurance; but his passion is FAM, a multi-level marketing scheme devised by the charismatic Obie Garbeau II (Ted Levine). Travis is burning the candle at both ends trying to fend for his wife and baby daughter. And that proves his undoing when a late-night trip to a FAM event results in his death. Now a widow, Krystal soon discovers the dark side of FAM. Travis wasn’t making any money from FAM – he was losing it rapidly. But driven by his “upline” Cody Bonar (Théodore Pellerin), Travis’s unshakeable faith in the “Garbeau System” took him into a downward spiral. When Krystal discovers the truth, she wants revenge. But she soon realises that if she can’t beat ’em, maybe she should join ’em.

On Becoming a God in Central Florida features some heavy hitters in the director’s chair – names like Rose Troche (The L Word), Tricia Brock (Mozart in the Jungle) and Jeremy Podeswa (Game of Thrones). Along with Funke and Lutsky, the writers’ room includes Michael Goldbach (The Romanoffs) and Carlos Rios (Colony).

The creative teams have crafted a compelling drama. The show deftly walks the fine line between humour and pathos. The key is that the script treats all the characters with the same level of respect, no matter how stupid, weak or heartless they might be. This means few if any “flat spots” in the show, because you can invest in all the characters. Also, it has a real topical relevance at the moment, with several news items appearing recently about the dangers of MLMs.

While the show isn’t an out-and-out comedy, it contains enough wry observational humour to keep things interesting. The show takes a couple of major pivots over the course of its first season (and has been renewed for a second). The writers do a good job of keeping track of the myriad characters, making sure their diverse storylines never spin too far off the main narrative. They skewer every racist and sexist attitude, every dirty tactic and every cliched slogan used by MLMs; at the same time digging into the insecurities that lead people to become part of them.

Dunst (The Beguiled) is excellent as the no-nonsense Krystal. Her character won’t allow herself to become a victim, and Dunst passionately portrays this inner strength. Her foil is Pellerin (The OA) as the naive Cody. Pellerin manages to find the human side of a character who could easily have been a stereotype. Mel Rodriguez (Fargo, the series) is a revelation as Krystal’s fragile neighbour Ernie. This is an unexpectedly nuanced performance that adds real depth to the show. And the fabulous Ted Levine (The Report) is perfect as the ruthless Garbeau.

I was initially wary of On Becoming a God in Central Florida; but this is a show that’s really grown on me as it’s gone along. It’s almost like the promises those MLMs make – if you’re prepared to invest, the returns can be fantastic.