Rodgers & Hammerstein’s classic Oklahoma! revolutionised the American musical. This version from The Production Company (TPC) features a searing lead performance, a superb principal cast, and a wonderfully creative set. Thirty-two performers take to the stage, along with TPC’s own orchestra.

Oklahoma! is set outside the town of Claremont in 1906. It tells the story of farm girl Laurey Williams (Anna O’Byrne) and her courtship with two rival suitors; cowboy Curly McLain (Simon Gleeson) and sinister farmhand Jud Fry (Ben Mingay). 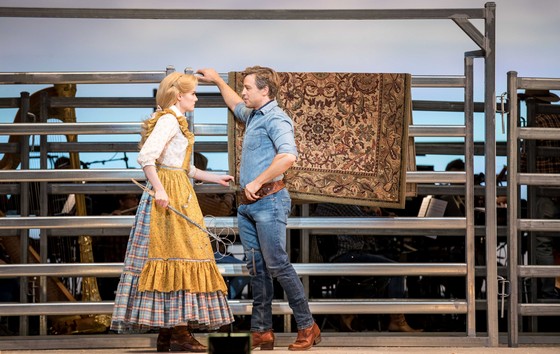 When The Production Company last presented Oklahoma!, in 2005, Chris Parker – a young Western Australian Academy of Performing Arts graduate – played love-struck Will Parker. Now, he makes his TPC debut as director of this production. Founding musical director Guy Simpson (complete with cowboy hat) conducts the orchestra, all kitted out in western attire. Loved it!

The music is magnificent – “Oh, What a Beautiful Mornin’”, “I Cain’t Say No” and “Oklahoma” are among the most popular numbers.

The staging (the set designer is Dale Ferguson) is a real winner. The band is corralled behind silver fencing; and the props include a washing line, wooden crates, a rug and small bench. The simplicity in no way reduces its effectiveness.

The cast is frighteningly good, in the best sort of way. Simon Gleeson leads ably. He produces a wonderful rendition of “Oh, What a Beautiful Mornin’” and continues to impress throughout the production. Plaudits also to Anna O’Byrne and Elise McCann for their respective scene-stealing roles. In fact, many of the names – extending to the likes Richard Piper, Greg Stone, Glen Hogstrom and Glaston Toft – read like a who’s-who of musical theatre. It was a privilege to be in the audience. 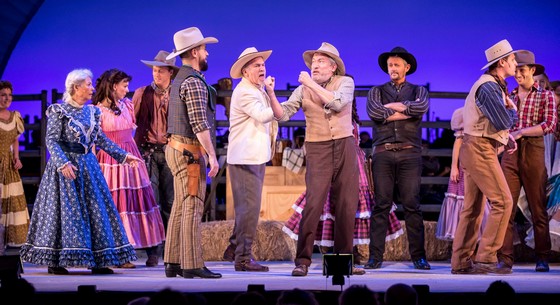 Robyn Nevin, too, has a commanding presence as the diminutive and feisty Aunt Elller Murphy. Undoubtedly the funniest and most enjoyable role, though, goes to Piro as the too smart for his own good character Ali Hakim. He has a ball with the material.

Things really shake out in the second act, in which there’s action aplenty and no shortage of puckering up. There is so much to love about this production of Oklahoma!, which continues to pack a punch several generations after it first made such a splash. It kicks off TPC’s 20th season with aplomb.