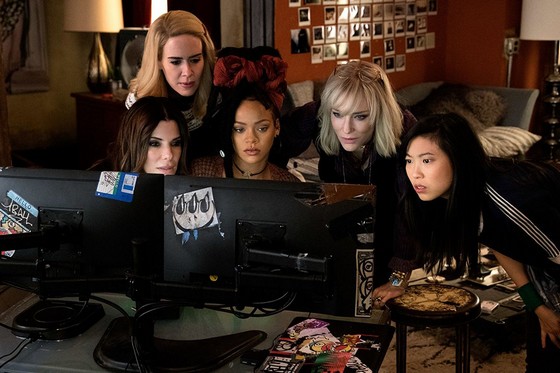 Ocean’s Eight centres around a well-planned heist with the usual split-second timing, complicated scenario, and the occasional hiccup in the otherwise well-oiled plan. This female-centric caper comedy is lightweight stuff, but is also a lot of fun.

Debbie Ocean (Sandra Bullock), the sister of the recently departed Danny Ocean, has just been released from prison after serving a six-year stint. She made the most of her time inside though. She’s hatched an elaborate scheme to steal a fortune in jewels during the annual gala ball at New York’s Metropolitan Museum.

Debbie assembles her team, starting with her best friend and partner-in-crime Lou (Cate Blanchett). The rest of the team includes gifted hacker 9 Ball (Rhianna); fashion designer Rose Weil (Helena Bonham-Carter), who has fallen out of favour and is heavily in debt to the IRS; soccer mum Tammy (Sarah Paulson), who has a garage full of stolen goods; Constance (Awkwafina) a gifted pickpocket; and Amita (Mindy Kaling), a jeweller with some mummy issues. Their target is a $150 million necklace that will be worn by celebrity actress Daphne Kruger (Anne Hathaway).

Bullock brings a tough edge to her performance here as Debbie. The character keeps essential elements of her plan close to her chest, but Bullock also inject a touch of vulnerability. Blanchett coasts along in a role that hardly taxes her, while Hathaway has a lot of fun as Kruger (and seems to be sending up her own screen image). Bonham-Carter looks a little like Cindy Lauper with her gaudy dress sense. A host of celebrity cameos from the likes of Anna Wintour and B-list actors during the Met Gala add authenticity to these scenes. James Corden has fun as a bumbling insurance investigator. Elliot Gould’s cameo as Reuben provides a solid link to the Clooney films – as does a strategically placed photograph – but this film stands on its own.

The pleasure of films like The Sting and American Hustle is in watching the elaborate con come together and unfold on the screen. Director Gary Ross (The Hunger Games) and Olivia Milch wrote the script. I wish they’d fleshed out some of the supporting players in more detail. Ross maintains a breezy pace throughout. Juliette Welfling (Dheepan) provides slick editing. Cinematographer Eigil Bryld (In Bruges) has shot the film in glossy fashion.