The Nut Job 2: Nutty by Nature is the sequel to 2014’s original animation. It begins with Surly Squirrel (voiced by Will Arnett), his pug friend Precious (Maya Rudolph) and his best friend Buddy the rat living it up in a recently closed nut shop. 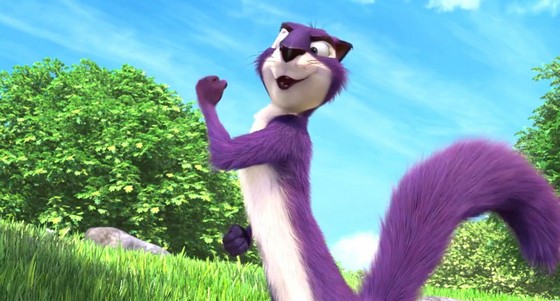 Food is abundant and life is good … until the shop literally explodes. After an unsuccessful search for food in the city, Surly returns to Liberty Park. Andie (Katherine Heigl) is happy that all the animals are living together in the park again, just as nature had intended. Unfortunately for the animals, Mayor Muldoon (Bobby Moynihan), Oakton’s most corrupt politician, has other plans for Liberty Park. Looking down from his penthouse office, he sees the beautiful park as nothing more than premium city real estate that generates zero profit.

At a news conference, the Mayor announces Liberty Park will be bulldozed and replaced with Libertyland. Who wants a regular park when you can have an amusement park, right? The Mayor’s spoiled daughter Heather (Isabela Moner) has visions of cotton candy dancing in her head. Her French bulldog Frankie (Bobby Cannavale) is also in town. As the Mayor’s bulldozers roll in, Surly leads the animals in fighting back – but the scrap isn’t going to be pretty.

Writer and director Cal Brunker (Escape from Planet Earth) is at the helm. He brings an aggressive approach to his male-skewed feature. The film follows predictable lines. Ice Age’s Scrat chasing his acorn is far easier to watch … and more worthy.

From the get go, Nut Job 2 really got under my skin. There’s no subtlety here; and few, if any, surprises.

The lead character’s name, Surly, underlines his true nature. His style of haphazard leadership surely is not what we are wanting for our children. And then the filmmakers decide to introduce an army of angry, recalcitrant mice, led by a mean-spirited son of a b….

Sure, there are a few cute scenes and enjoyable one liners, but the story is hardly fresh or inviting.