The French comedy/drama Normandy Nude tells of a town of struggling farmers who prepare to pose nude for a photo shoot. If this brief synopsis makes it seem like a Gallic variation on both The Full Monty and Calendar Girls, you wouldn’t be far off the mark. 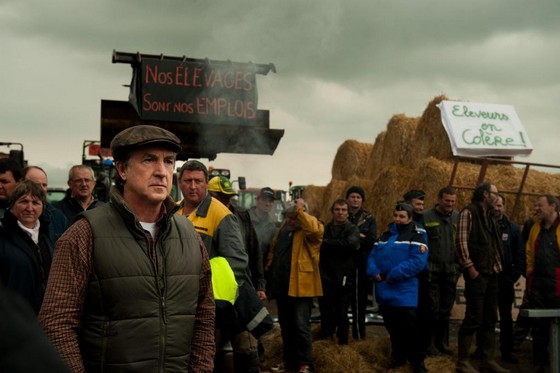 The film is set in a small farming community. With the price of both dairy products and meat falling, local farmers are doing it tough and facing financial ruin. But attempts to bring relief from local government authorities seem to have fallen on deaf ears. The local mayor Balbuzard (Francois Cluzet) has tried hard to make things a little better for his constituents by arranging strike action. He dedicates most of his time to working for his people, so much so that his frustrated wife left him years ago.

While staging a mass protest on a main highway, Balbuzard and the townsfolk catch the attention of passing American photographer Newman (Toby Jones). He’s a Spencer Tunick-like artist who specialises in photographing tastefully posed groups of nudes. Balbuzard comes to an arrangement with Newman; hoping that having the villagers photographed in the nude may heighten awareness of their plight. His idea though divides the community and exposes their small-minded attitudes. And Newman has set his sights on a picturesque field for the shoot.

But personal issues, prejudices and beliefs begin to conspire to sabotage the project. Hot-tempered and jealous butcher Roger (Gregory Gadebois) does not want his wife Gisele, a former beauty queen, to pose nude. His overreaction threatens to derail the shoot. Two neighbouring farmers – Eugene (Phillipe Rebbot) and Maurice (Patrick d’Assumcao) – squabble over ownership of the field in question. Cyclist and local hero Vincent (Arthur Dupont) is the son of the town’s former photographer, but he is preparing to close up shop and move away. That is until he finds romance with Charlotte (Julie Ann Roth), who works in the local cheese factory.

Phillipe Le Guay (The Women on the 6th Floor) directs Normandy Nude, and co-wrote the script with Victoria Redos (The Bellier Family) and veteran writer Olivier Dazat (Asterix at the Olympic Games). Le Guay obviously feels affection for these quirky characters and their foibles. He superbly captures the rhythms and pace of small-town life and suffuses the material with some gentle touches of humour. He also captures the local politics, as well as the politics of food.

Jean Claude Larrieau (The Bookshop) provides some inviting cinematography which steeps us in the picturesque countryside and gives the film a nice surface gloss. The delightful locations lend an authenticity to the material.

Cluzet (The Intouchables) has an affable presence, although he tends to be typecast here as the well-meaning Balbuzard. He looks vaguely like a Gallic Dustin Hoffman, and has a similar hangdog expression as well as an intensity and conviction that he always brings to his roles.

However, there are a few missteps along the way. The film is narrated by Chloe (Pili Groyre). She’s the teenage daughter of a Parisian businessman. They’ve moved to the countryside for a sea change, but find it hard to enjoy their situation. She’s only a secondary character who has little impact on the story, so it seems like rather a strange creative choice for her to narrate. The script also has so many strands and sub-plots that it seems episodic at times. The pacing is a little uneven, and there are even a few scenes that fall flat.