A penniless wheeler and dealer gets in with the big boys and finds himself caught up way over his head. That, in a nutshell, is what the cleverly conceived and executed mind-bender Norman is all about.

Norman Oppenheimer (Richard Gere) lives a lonely life in the margins of New York City power and money. He is a would-be operator dreaming up financial schemes that never come to fruition. As he has nothing real to offer, Norman strives to be everyone’s friend, but his incessant networking leads him nowhere. 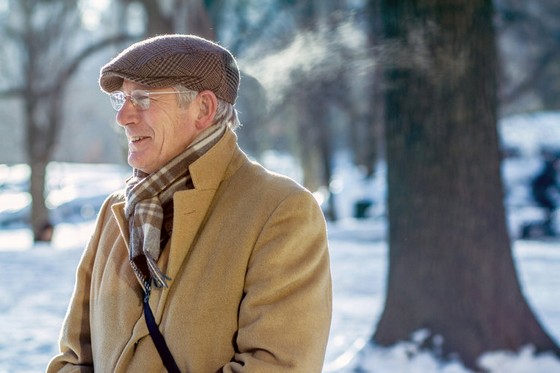 Always on the lookout for someone willing to pay attention to him, Norman sets his sights on Micha Eshel (Lior Ashkenazi), a charismatic Israeli politician alone in New York at a low point in his career. Sensing Eshel’s vulnerability, Norman reaches out with a very expensive gift, a gesture that deeply touches Eshel.

When Eshel becomes Prime Minister three years later, he remembers. With his very real connection to the leader of a major nation, Norman is awash in the respect he has always craved. Flush with his newfound feeling of success, Norman attempts to use Eshel’s name to leverage his biggest deal ever. That involves a series of quid pro quo transactions linking the Prime Minister to Norman’s nephew (Michael Sheen), a rabbi (Steve Buscemi), a mogul (Harris Yulin), his assistant (Dan Stevens) and a treasury official from the Ivory Coast. Norman’s kaleidoscopic plans soon go awry, creating the potential for an international catastrophe he must struggle to prevent.

The new film by Academy Award nominated director Joseph Cedar (Footnote) is a comic and compassionate drama about a little man whose downfall is rooted in a human frailty all too easy to forgive – a need to matter. Writer/Director Cedar’s story of Norman Oppenheimer, humble New York fixer, is a re-imagining of an archetypal tale that has played out in history and literature for thousands of years, namely the Court Jew.

“The narrative of a Court Jew follows a classic structure,” says Cedar. “A Jew meets a man who eventually becomes a man with power, but he meets him at a point where his resistance is very low. He offers the man a gift or a favor and when the man ends up being in power, he brings the Jew into his court.” But it is hardly smooth sailing from there. Looking for a modern counterpart to the Court Jew, Cedar set on the idea of a “fixer,” someone who helps powerful people get things they want, by taking actions they are unwilling to openly do themselves.

In this case Oppenheimer is well meaning, but not quite right. Gere gives depth, purpose and meaning to his portrayal, a far cry from his image in the likes of Pretty Woman. If his role is convincing, so too is that of Sheen as his lawyer nephew, complete with American accent. Charlotte Gainsbourg, too, is excellent as a legal eagle Oppenheimer meets in transit and immediately sets upon, promising her all sorts of introductions she doesn’t ask for … or need … or want. But that is Oppenheimer’s wont, seemingly built into his DNA.

I greatly appreciated not only the complexities of the script, but the way the story was woven and how it unfolded. This is intelligent, thought-provoking adult cinema with more than a little ring of truth about it. Here you have social commentary about most people’s motives and mindset, through the eyes of an eccentric (someone who, I dare say, has mental health issues). Rated M, Norman: The Moderate Rise and Tragic Fall of a New York Fixer scores an 8 out of 10.