Noises Off has been around for a few decades  – it was written by British playwright Michael Frayn in 1982. And unlike The Play That Goes Wrong or Fawlty Towers, it feels like it. The farce appeared dated to me and it was inclined to push the envelope too far at every turn. 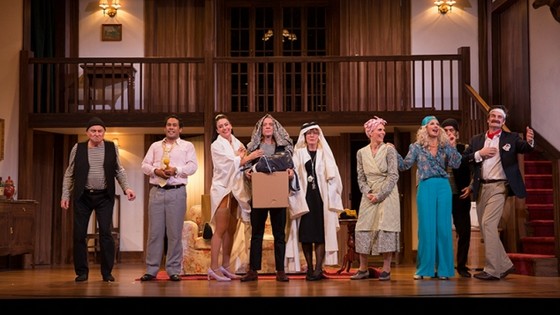 The first act of a mock play titled “Nothing On” is performed three times. The director is increasingly infuriated by the fact that on the eve of opening night the cast remains totally unprepared. They miss cues, drop lines and find the use of props baffling.   The relationships between cast members are fraught and romantic rivalries abound. Pandemonium ensues and egos are trampled, while trousers drop.

Even though the performance of the first act of the faux production changes slightly by virtue of everything going wrong from the first to the third run-through, by the final try I was over it. I say that notwithstanding the ad libs into which the third effort descends. Nevertheless, I preferred act two of Noises Off to what went before interval. While there were laughs in both acts, the high farce escalated after the break.

Simon Burke is superb as the snooty, egotistical director whose libido knows no bounds. The references to sardines – the most oft used prop – became too numerous. The highly developed rotating set, showing front of house and behind the scenes, is a master class in design and functionality. It works a treat. 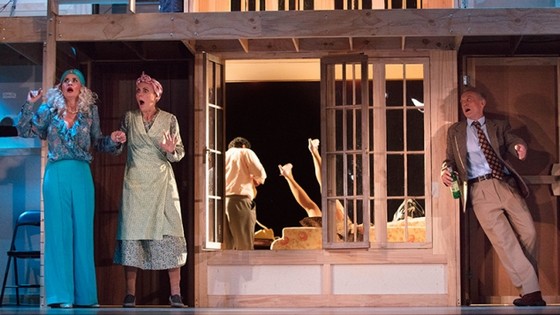 Judging from what was said among the preview audience I saw this with, Noises Off will polarise. Some will laugh until they cry. Others will find the more is more approach too heavy handed. I wanted to like it more than I did. There was just too much running around and hysterics.

As a result, while not without merit, Noises Off ended up less than totally satisfying. Sam Strong directs the nine strong cast in the 2 hour 35 minute (including interval) play. It is at the Playhouse, Arts Centre Melbourne, until 12 August 2017.