Epic in scope and set against the backdrop of the Cold War, Never Look Away spans some thirty years of German history and dramatic social change. It is loosely based on the life of renowned German artist Gerard Richter, widely regarded as one of the most important contemporary artists. 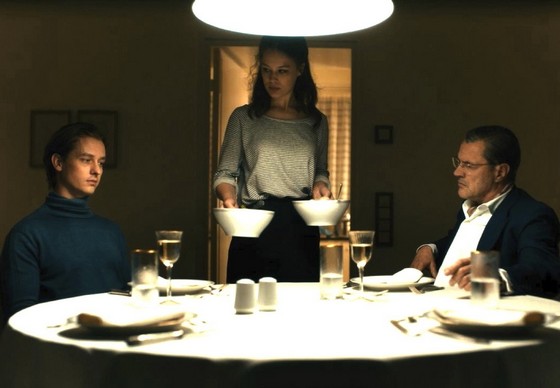 The film opens in Dresden in the 1930s, where we first meet Kurt Barnert (played mostly by Tom Schilling). He loved his eccentric aunt Elizabeth (Saskia Rosendahl), a free spirited and creative woman who encouraged the young Kurt and his art. She was eventually institutionalised and executed by the Nazi doctors for being “imperfect” and “defective.” After the war, Kurt is an aspiring artist who finds himself working as a sign painter for an East German collective. His foreman recognises his talents and encourages him to apply for admission to the local art school. There he meets and falls in love with Elle (Paula Beer), a fashion design student who comes from a fairly wealthy family. Her father though is Dr Seeband (Sebastian Koch), a world renowned gynaecologist. He doesn’t approve of the working class Kurt or his artistic ambition and sets out to sabotage the relationship. But unbeknownst to both men, they have a shared connection dating back to Seeband’s secret past as an SS doctor specialising in eugenics and experimenting on helpless young women.

At art school Kurt is admired and respected for his talents and becomes something of a poster boy for communist ideals. But he feels dissatisfied at having to contain his individual ambitions for the collective good. Eventually Kurt and Elle manage to escape East Germany and head to West Germany shortly before the infamous Berlin Wall is erected and separates east and west both physically and politically. There Kurt soon enrols in Dusseldorf’s famous art academy where he meets the eccentric and colourful professor van Verten (Oliver Masucci). At Dusseldorf where young artists are looking for creative expression and “the next great idea”, Kurt is told that “painting is dead” as an art form and is encouraged to find his own artistic voice.

Kurt’s personal story and struggle is used to explore and contrast life and artistic expression in both the East and the West. In East Germany art was mainly a propaganda tool used to serve the people and the cause of advancing Communism, while in the West it was much more about creativity and individual expression.

Never Look Away is the third film from acclaimed German filmmaker Florian Henckel von Donnersmarck, whose debut film was The Lives of Others. That film was set against the backdrop of the repressive East German regime in which the notorious secret police, the Stasi, spied on its citizens. Never Look Away deals with some similar ideas and is equally as critical of the repressive regime as it looks at life in Germany both before and after WWII and the shifting nature of German society. This is essentially a love story that also deals with the creative process, freedom and politics, personal tragedy, the dark legacy of Germany’s Nazi past and the collective guilt of a nation as it attempts to move on.

The film has been beautifully shot by Oscar nominated cinematographer Caleb Deschanel, whose lush, gorgeous and bright widescreen lensing brings the settings to life. There are numerous sex scenes which have been tastefully shot, while dark and muted lighting lends tension to the scene in which our protagonists leave for the west. One of the standout scenes depicts the firebombing of Dresden, when Allied bombers destroyed the city. Von Donnersmarck and his production team have effectively recreated the ruined city for some of the early scenes.

Schilling is well cast and play Kurt from an idealistic teenager through to his early 30s when he has become a more ambitious and cynical artist. Schilling is handsome and charismatic and brings a mix of intelligence and curiosity and strength to his performance. Beer is also good and brings charm and vulnerability to her role. Perfectly cast, Koch (who appeared in The Lives of Others) makes Seeband an arrogant, slightly creepy character. Although the villain of the piece, Koch also imbues the character with a sharp intelligence.

The film runs for a massive 189 minutes; but unlike the recent three hour slog of Avengers: Endgame I was barely conscious of the passage of time with this fascinating, engaging and challenging piece of work.