Pablo Neruda was the pen-name (and later legal name) of Chilean poet, diplomat and politician Ricardo Eliécer Neftalí Reyes Basoalto, who lived from July 12, 1904 to September 23, 1973. In 1971, he won the Nobel Prize for Literature.  Lyrical, poetic and steeped in politics, Neruda is what I would term a “festival” film; one for purists. 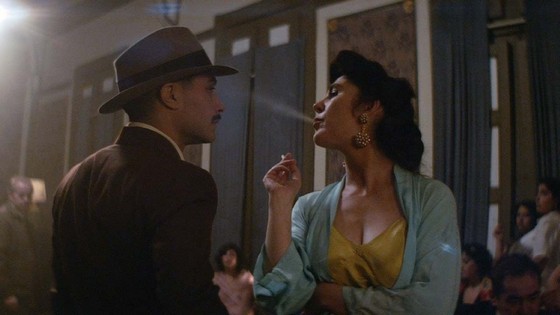 It’s 1948 and the Cold War has reached Chile. In congress, Senator Pablo Neruda (Luis Gnecco) accuses the government of betraying the Communist Party and is swiftly impeached by President Gonzalez Videla (Alfredo Castro). Police Prefect Oscar Peluchonneau (Gael García Bernal) is assigned to arrest the poet. Neruda tries to flee the country with his wife, the painter Delia del Carril (Mercedes Morán), but they are forced into hiding.

Inspired by the dramatic events of his new life as a fugitive, Neruda writes his epic collection of poems, “Canto General”. Meanwhile, in Europe, the legend of the poet hounded by the policeman grows and artists led by Pablo Picasso clamour for Neruda’s freedom. Neruda, however, sees this struggle with his nemesis Peluchonneau as an opportunity to reinvent himself. He plays with the inspector, leaving clues designed to make their game of cat-and-mouse more dangerous, more intimate.

In this story of a persecuted poet and his implacable adversary, Neruda recognizes his own heroic possibilities: a chance to become both a symbol for liberty and a literary legend.

Written by  Guillermo Calderón, he and director Pablo Larraín  have created a false biopic. It’s a biopic that isn’t really a biopic because they don’t really take the task of making a portrait of the poet that seriously. Instead, they decided to put together a film from elements of invention and playfulness.

Larraín says Neruda liked crime stories and that’s why the film turns into a road movie with a police investigation element – genres which involve changes and evolving characters, to which they have added elements of farce and the absurd. “We see the landscape and all the movement within it as a transformative and illuminating process. No one winds up as he began – neither the hunter nor the prey,” Larraín says.

There is a particularly telling scene with political cronies in a bathroom at the beginning of the movie … that I found sensational because it was different to anything else I had seen.

Neruda looks sensational. The period detail is impressive. So, too, the stylish ensemble worn by the players. I loved the elegant, double breasted suits. It takes a while to work out what is going on and the politics of the piece can serve to overwhelm, if you let it. In essence though, this is really a tale of the hunter and the hunted, told through the prism of politics.

The hunter is also the narrator, a man with tickets on himself, courtesy of his father’s statuesque (literally speaking) standing as a law enforcement official. Peluchonneau pictures success and triumph and yet the heroic “of the people” figure of Neruda – a womanizer and wordsmith par excellence – means the former will inevitably be outwitted … or will he? To get the answer to that, I’m afraid you’ll just have to buy a ticket to see Neruda.

Make no mistake, it is a limited interest film, but that takes nothing away from the performances or the direction. Rated MA, Neruda scores a 7 out of 10.