Jimi Bani is an actor/artist of big heart and attractive personality exuding a charisma that is all enveloping. His welcome and invitation to hear his story, My Name is Jimi, is irresistible . 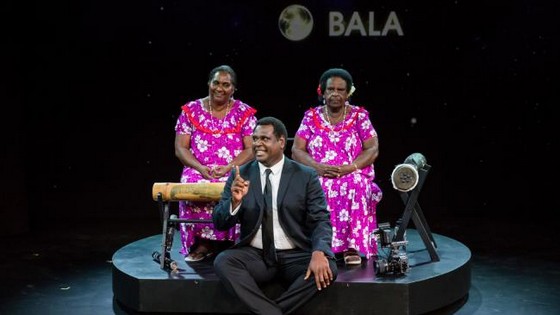 Jimi was born on a remote island: Mabuiag (Jervis Island) in the western part of Torres Strait to the north of the Australian mainland. With the passing of his father, Ahdi Dimple Bani, Jimi will soon be the ninth Chief of Wagadagam. Part of his inherited responsibility is to sustain and preserve his island’s language and cultural traditions. Quoting his grandfather, Adhi Ephraim Bani Jnr, he talks about:

Keeping the Fire Burning. … There is a fire, a bright flame that was lit in the past, it is still burning but the woods are burning out. My job is to put new woods in to keep this fire burning. The fire being our culture and cultural practices, our language and our identity. The woods being us teaching, us practising and us maintaining our culture.

This production from the Queensland Theatre and incorporated into the Sydney Festival has Jimi and his family take us on an entertaining and ‘educational’ storytelling. It’s peripatetic in its fun and enlightening ‘landings’ of interest – personal memories, folk stories, colonial histories, song and dance – to pass on an intricate and complex knowledge that is a thread in the weave of the fabric that is being human. The family includes Jimi’s grandmother (Petharie Bani), mother (Agnes Bani), two of his brothers (Conwell Bani and Richard Bani) and his eldest son (Dmitri Bani). There are four generations on stage and three languages and we are made aware of the grandmother’s history and the cultural arc to Dmitri, with his modern technological gadget (iPhone). We are shown that the past is present and the present is what will make the future – the youth standing on the shoulders of ancestry and culture, with the latest technologies as possible tools (servants) of preservation. 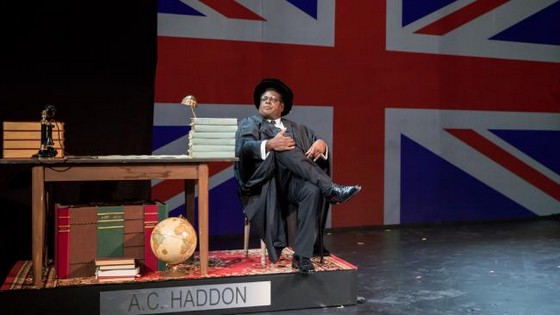 My Name is Jimi,, directed by Jason Klarwein, uses the cultural ‘evidence’ of costume, song, dance and stories. He incorporates modern technology (sound and projection by Justin Harrison, a design by Simona Cosentini and Simone Tesorieri) and ‘wheeled’ on artefacts. With the living ingredients of charm, skills and generosity of this family, we are taken in an 80 minute whirl into a world that enriches our lives with knowledge and a respect for the traditions and family ‘wealth’ – what it means to be ‘family’ – of this island culture.

The fire is being kept burning and the woods are being refreshed – no doubt, with Jimi Bani’s leading presence on the Belvoir stage. The knowledge gained and the warmth and generosity shared by this family is a pleasant antidote to the turmoil of our provocative times.

The Belvoir / Queensland Theatre / Sydney Festival production of My Name is Jimi is showing at the Upstairs Theatre, at Belvoir, Surry Hills from 5 to 21 January 2018.