Mystery Road has graced both the big and small screens. The first two versions were critically received films (Mystery Road and Goldstone) and the third was the first season of the ABC TV adaptation in 2018.  The events of Mystery Road S1 slotted in between the timeline of the two movies. All versions star the magnetic Aaron Pedersen. Confused? You could safely watch either the movies or the television series without too much mental mashup, but perhaps not both. 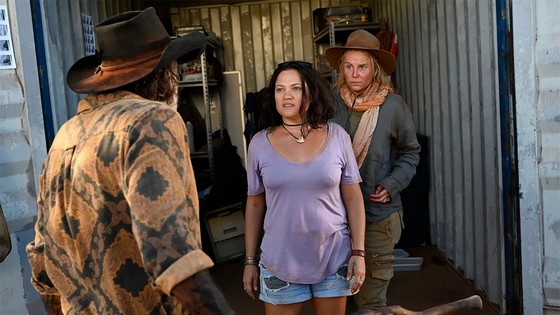 Detective Jay Swann is perpetually angry and the weight of the world rides around on his shoulders along with a whole lot of bad memories.  Sent to the northern Western Australian town of Gideon (fictional) when a headless corpse is discovered in the mangroves, the formidable Jay is once again not received by the locals with open arms. Jay’s ex wife is in the town, and she still definitely still has the dirts on with her ex.  The local cops have enough on their hands managing racial tensions and remote endemic issues such as poverty, addiction and its disaffected youth determined to de-rail lives that have barely begun.

A recent import to Gideon is a Swedish archaeologist negotiating the double hazards of working in the area with little support whilst performing her duties under the leery eye of the locals. Discovering both a major archaeological find and a duffle bag containing more recent bodily remains just outside of her dig parameters, the determined Doctor Sandra Elmquist (Sofia Helin) finds that the ethical conundrum she now has in her hands is also a ticking time bomb for a tense community that needs little to set things off in the best of times.

Aaron Pedersen could easily have a sideline in being hired by parents to get their teenagers out of bed in the mornings. The man is seriously terrifying when he’s in a rage on screen, and his brooding presence conveys both threat and consequence with just the slightest lift of an eyebrow.  As this is entirely his show, Pedersen’s acting makes or breaks Mystery Road.  As fast as we may habitually speak out of the corner of our mouths over here in the West, I still found it hard to understand a lot of the gutturally evicted rants.  Regardless, it is hard to take your eyes off him.  Stomping all over the case in cowboy boots and a ventilated Akubra, Pedersen is completely convincing as both the man you’d never want to meet in a dark alley (or truckstop, donga park, or what have you) and also the cop you’d absolutely want on the case should you ever go missing.

Mystery Road S2 was filmed in the Northern regions of Western Australia, Broome and the Kimberley. The outback and coastal landscape is stunning, and as spiritual as a church even when viewed via your television screen (of course pick the largest screen you have in the house to take best advantage of the cinematography).  The unseen menace of what may be out there in the perfect darkness of kilometres of nothing is another character of Mystery Road, a phantasmic presence that would be unique to each viewer and their pre-conceptions.

Mystery Road again makes the Australian red North seem like one of those places you’d love to visit for the vivid scenery, yet never want to linger too long in.  What rides constantly in Mystery Road is the racial divide between the traditional land owners and everyone else, the cultural wars of resulting from urban interlopers entering outback communities, the marginalized folk who take refuge in the fringes of society, and decades of deeply entrenched generational trauma. It’s a tough call for any one book, movie or TV show to take all that on and remain engaging for the masses so let’s regard Mystery Road as what it is – an entertaining crime drama that delivers on its promise.

Mystery Road is currently dropping an episode a week onto ABC iView.