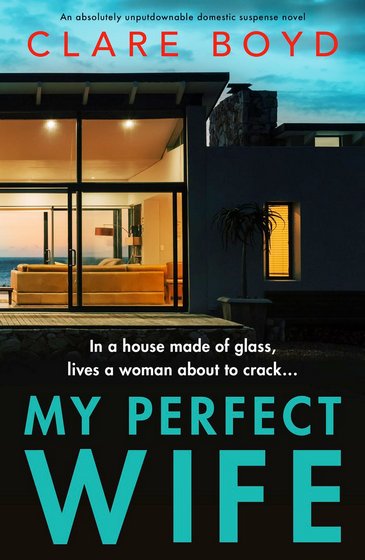 As popular fiction catches up with the fact that the home is where true horror lives, there’s a heck of a lot of authors writing about the dangers nested deep in our most intimate relationships.  My Perfect Wife depicts how many small acts of cruelty and control can incrementally cause enormous amounts of damage.

Returning home to help out her parents who are in a bind, Heather Shaw is once again living in the humble house she grew up in, located next door to the Huxley mansion. As a teenager, sneaking over for swimming lessons from the 25 year old Lucas Huxley, Heather’s memories of these sessions are some of the happiest she has to recall.  The only daughter of overprotective and pious parents, Heather viewed her time with Lucas as happy escapes from the burden of never being allowed to forget her station in life. Gordon and Sally Shaw were always there to remind their daughter of the dangers of mixing with a class above her own.

Lucas and Elizabeth Huxley are a golden couple with two adorable children, seemingly living the dream with a huge business partnership on the horizon that will soon catapult the family into the upper echelons of the rich and indulged.  Elizabeth walks the tight rope of keeping the domestic front running smoothly whilst keeping the mental load invisible from her powerhouse of a husband.  To assist them in their goals, the Huxley’s employ a young Yugoslavian couple to manage the house and renovations, and Heather’s parents also to keep on top of the gardening and odd jobs.

Back in the orbit of the charismatic Lucas once again, Heather draws the ire of Gordon who forcibly reminds her that she should not interfere in a marriage. Elizabeth seems quite hostile to Heather, who wonders if Lucas has revealed the past nature of their relationship to his seemingly fragile wife.

As Elizabeth plans the house party to end all house parties with the aim of pleasing their prospective new business partners, emotions and expectations are at an all time high.  It is obvious to everyone that things are not right at the Huxleys, but who should be the one to step up and put things to order?

Fraught with tension, My Perfect Wife presents a very believable depiction of a faltering marriage with witnesses forced to participate in its downfall by bonds of love or duty. We have the view from the inside, and the view from the outside.

The moral tone in this book is not just about trust in relationships but about being an enabler of someone else’s bad behaviour by cause of inaction or misguided loyalties.  It is not a spoiler to say that toxic relationships are at the centre of My Perfect Wife but it is not just about the co-dependencies that exist between two people in a marriage.

It’s a bit of a tightrope to classify novels such as My Perfect Wife as they are dramatic novels centred around crimes of coerce and control.  We’re used to a whodunit, more than a whydunit in our suspense reading.  My Perfect Wife is a slow complicated march towards a sure explosion that rewards the reader with some thinking material for the after.

My Perfect Wife is the fourth novel for British author Clare Boyd and e-published by Bookouture.