Muriel’s Wedding The Musical begins with a ‘Sunshine State of Mind’ Porpoise Spit burst of hyper colour and brashly bright lighting that sets the tone for the joy of its satirical stage experience. What follows is an explosion of high energy, full of colour and movement to brighten any adult day. The affectionate stage realisation of the classic Australian story is filled with sentiment and recognisable motifs, from the early scene bogan wedding of Tania (Laura Murphy) and Peter ‘Chook’ (Joshua Robson). That is where Muriel Heslop (Natalie Abbott) is sitting on an esky wearing her new Target dress after catching the bride’s bouquet with accompanying crazy grin. It is relatively simple staging that belies the big, impressive sets to follow, such as that of the titular wedding. 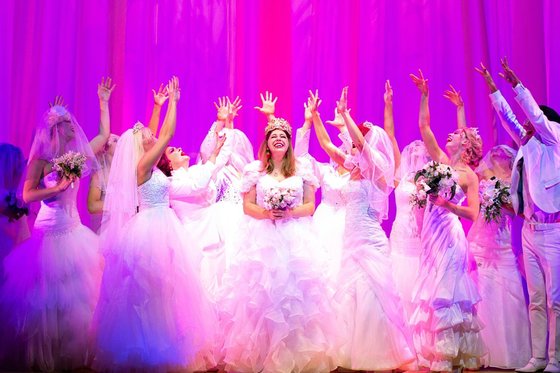 From the outset, scene transitions are appropriately swift. As PJ Hogan, writer of both the film and stage productions knows well, there is a lot of story to get through, so things have to move quickly. Still, it stays true to its source material, updated to today. Muriel no longer works at a video rental store. Instead, she has been made into a millennial in a modern social media space. Rather than being cliched, the update with inclusion of technology, serves as one of the show’s highlights, illustrating how the story is more relevant than ever.

Muriel’s nemesis mean girl squad (Imogen Moore and Catty Hamilton, along with Laura Murphy) are able to adopt a selfie pose in a moment and their Act One number ‘Can’t Hang’ is an early highlight. That is in spite of the fact that it sees them cruelly telling Muriel the harsh truth of why they can no longer be friends with her, but not before letting her finish her cocktail.

Iconic lines from the mega-hit film are all there and are clearly appreciated by the audience, particular Joanie’s (Manon Gunderson-Briggs) judgement about her sister Muriel, who does behave terribly. All the requisite important moments also appear. They include the ‘Waterloo’ performance. That is when opportunistic Muriel gatecrashes the girls’ trip of her ‘friends’ using money manipulated from her trusting mother (Pippa Grandison) and, while there, is befriended by sassy stand-up-for-herself Rhonda (Queenslander, Stefanie Jones).

At its core Muriel’s Wedding The Musical is a celebration of friendship, from Rhonda’s declaration of being with Muriel, through to the protagonist’s move to Sydney, where everyone can be what the want to be. Accompanying the occasional ABBA song, the show features a vibrant contemporary pop soundtrack of original music and lyrics by Kate Miller-Heidke and her long-time collaborator, husband Keir Nuttall. The heavenly pop number ‘Sydney’ appears as an appropriate encore given its ability to earworm your journey home.

Not everything is “sunshiny” in its sentiment, however, as Act Two gives us both the beautiful and moving ‘True Friend’ and the pathos of Betty’s farewell from her children, ‘My Mother’. There’s also condemnation of their politically-ambitious father Bill’s (David James) treatment of her while all the time running around with Deidre Chambers (Chelsea Plumley). But even this sad, emotional ballad is ultimately uplifting.

Abbott is wonderful as the multi-layered Muriel; she captures her idiosyncrasies without making the performance into a caricature. This Muriel is one of her own making whom we love just as much as any other, despite the character’s often questionable actions.

The supporting cast, too, is first-class. Stephen Madsen is a wonderful Act Two surprise as Muriel’s Russian knight in shining lycra, Alexander Shkuratov. His reactions are the best at eliciting every comic possibility from his scenes, from their first meeting to broker an arranged marriage, through till their final connection. Dave Eastgate is also noteworthy in his heightened take on the swimmer’s enthusiastic coach Ken, keen to get a marriage happening so his charge can compete for Australia at the Commonwealth Games. 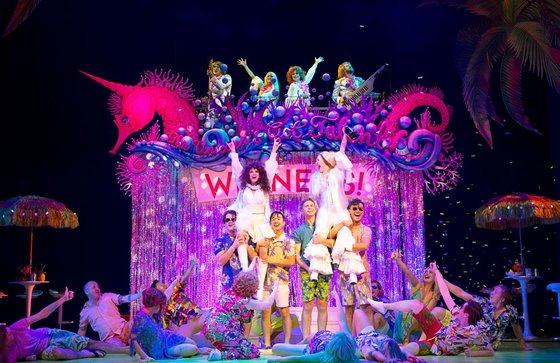 While most of Muriel’s family barely become more than the stereotypes of their initial creation, Grandison (who played Nicole in the original film) is sincere as her troubled and put-upon mother, Betty. In his professional debut, Brice Nobes makes our heroine’s parking inspector beau so genuinely likeable that it’s easy to be on his side.Muriel’s Wedding The Musical is clearly a crowd-pleaser. While it is a little longer than usual musical length, Act Two especially zings along to have you leaving singing with the happiness of an ABBA song and then some. This is a spirited celebration of the underdog. It is not only true to its source material but maintains its sensibility and the highs and lows of its emotional journey through the life of a character we have long held in our hearts.

Muriel’s Wedding The Musical is playing at Lyric Theatre, QPAC until 26th October, 2019.

For more of Meredith Walker’s writings on theatre, check out Blue Curtains Brisbane