A great sense of fun and a rich array of talent are on show as Muriel’s Wedding The Musical hits town.

Toni Collette endeared the socially awkward Muriel Heslop to Australia in PJ Hogan’s 1994 film, Muriel’s Wedding. Collette may have left big shoes to fill, but 23-year-old Natalie Abbott has stepped into them with aplomb in her professional debut. She possesses a powerful voice and is positively radiant as Muriel. In fact, her broad, infectious smile very much reminded me of Collette. 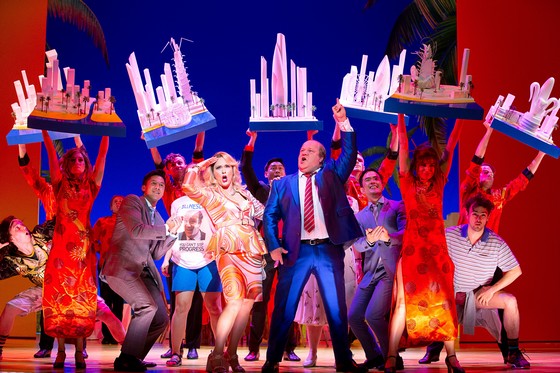 Equally dynamic is Stephanie Jones, who adopts a “take no prisoners” attitude as Muriel’s bestie Rhonda Epinstall. For masterful comic timing and all-round theatre smarts you can’t go pass the versatile Christie Whelan Browne. She always impresses, and does so again as arrogant Tania Degano.

David James is a larger than life presence as Muriel’s domineering father, Bill, who constantly belittles his downtrodden wife Betty (Pippa Grandison) and “good for nothing” children. He commands your attention in every scene he’s in. Chelsea Plumley may only play a small role as Bill’s lover, Deidre Chambers, but she uses her big voice to full effect. Stephen Madsen had the audience swooning with his chiselled frame. He plays Russian swimmer Alexander Shkuratov, talked into a sham marriage with Muriel so he can gain citizenship.

The production features a 31-strong cast. In among the laughs, the story also has pathos. It centres around an overweight young woman who shuts herself in her room and listens endlessly to ABBA songs. She dreams of escaping her dead-end small town of Porpoise Spit and marrying a handsome man in a fairytale wedding. Her so-called friends treat her horribly and want nothing to do with her. They’re certainly not about to invite her on a cruise they take, but Muriel finds a way of getting on board anyway.

That’s where she meets an old school mate, Rhonda, another girl bullied by Tania back in the day. Rhonda quickly gets her own back on Tania. And before you know it Muriel and Rhonda are rooming together in Sydney, which is where Muriel’s life starts to open up. Mind you, there are plenty of shocks and surprises still in store for her, as Muriel struggles to tell the truth and be comfortable in her own skin. 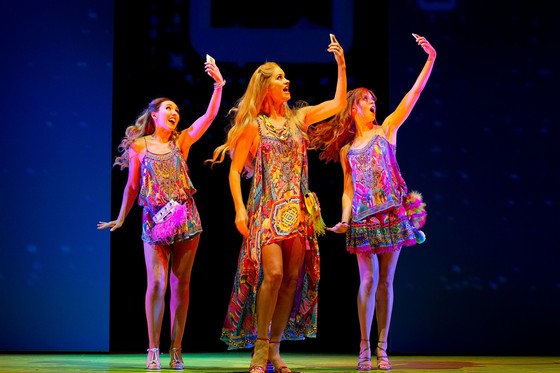 PJ Hogan adapted his own film script to the stage, contemporising it with modern political and social media references. Partners in life as well as in work, Kate Miller-Heidke and Keir Nuttall are responsible for the splendid music and lyrics. Of course, Muriel’s Wedding wouldn’t be Muriel’s Wedding without plenty of toe tapping ABBA numbers and Hogan has ensured that Agnetha, Anni-Frid, Benny and Bjorn have a strong presence in the show. Gabriela Tylesova has a keen eye for detail and has done an outstanding job with the set, costume and projection design. The incomparable Simon Phillips (Priscilla, Queen of the Desert) directs, with choreography by Andrew Hallsworth,

Muriel’s Wedding The Musical delights and gives bogans street cred. It’s immensely enjoyable and highly entertaining – bold, bright and breezy from start to finish. It is playing at Her Majesty’s Theatre in Melbourne until 9 June, before heading to Sydney’s Lyric Theatre on 28 June 2019.