What should you do when making a film of a world-famous book by Agatha Christie and a large part of the audience knows the ending already? Well, the best thing you do is to gather a star cast and using the necessary digital magic tricks to ensure a wow effect. Whether this is enough in Murder on the Orient Express is for me to know and for you to find out. However, I wasn’t that impressed. OK, the first bird’s eye views of the Orient Express cutting through the landscape and those swirling camera movements in the snow, look breathtaking. But that’s obviously not enough. 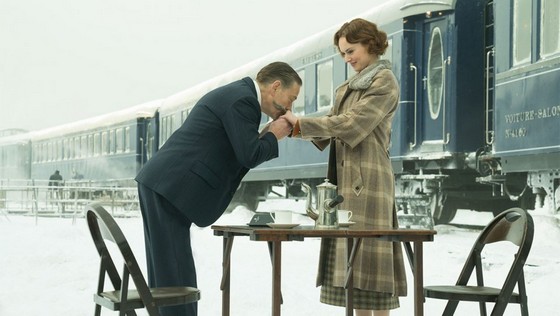 So, after the introduction of Poirot (Kenneth Branagh), who got an overwhelming mustache, one can calmly reel off the list of familiar faces. And those are certainly not the least. Judi Dench, Johnny Depp, Michele Pfeiffer, Daisy Ridley, Penelope Cruz, Willem Dafoe, Derek Jacobi, Olivia Colman and Leslie Odom Jr. are introduced one by one. And then we just have to wait for the train to set off. Someone is killed, and Poirot can start sniffing around for the killer. Fortunately for him, an avalanche causes a delay in such a way that he can unravel the exciting mystery before the authorities arrive.

Exciting? Well, not for me at least. I’ve never been a big fan of classic detective stories like those of Sherlock Holmes and co. I always thought it’s a bit stiff and not really entertaining. Or it must be such a beautiful film as Mr. Holmes where the retired detective tries to solve a final case at a leisurely pace, before his memory completely abandons him. In Murder on the Orient Express there’s no leisurely pace, because all suspects on the train must be analysed by Poirot and provided with a solid motive. And all in just under two hours. That’s a lot to show in such a short time. The introductions, the murder, the investigation and then the announcement of the perpetrator. And all this interspersed with stylized images of both the interior and the exterior. It sometimes felt rather hasty.

Perhaps you’ve lived under a rock and never heard of Agatha Christie and this famous story. In that case you should definitely give this movie a chance. Is it worthwhile for others? Well, if you want to admire the general splendour of the Orient Express, then you definitely should do this. And furthermore, the grotesque, oversized mustache of Branagh will certainly leave an impression. For me they can come up with an extra category for the Oscar award ceremony. That of “oversized decor pieces”!

Murder on the Orient Express is now available on DVD or streaming.