Tom Cruise feels totally miscast in The Mummy, a horror mishmash that the filmmakers spent far too much money on.

Thought safely entombed deep beneath the unforgiving desert, an ancient princess Ahmanet (Sofia Boutella – Kingsman: The Secret Service) whose destiny was unjustly taken from her is awakened in the present day. She was destined to be the first female pharaoh, but when the king finally fathered a son, Ahmanet was cast aside. Driven mad by betrayal, she was entombed for eternity by the very people who swore loyalty to her. 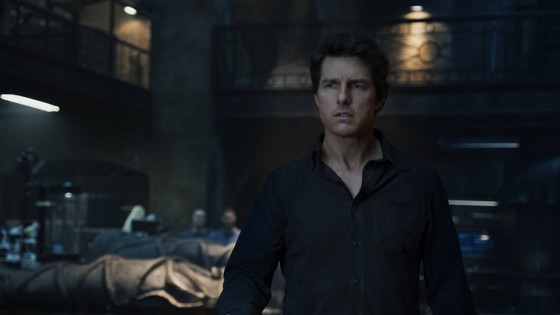 Accidentally awoken by soldier of fortune Nick Morton (Cruise), this original and extraordinarily powerful monster sets out to reclaim her stolen kingdom and ascend to her rightful place as pharaoh.  She brings with her malevolence grown over millennia and terrors that defy comprehension. With her evolving powers, the strange and seductive Ahmanet forges an unbreakable connection with Morton, and in so doing, intertwines their destinies.

One person who can see the good in Morton is Jenny Halsey (Annabelle Wallis), a British officer of cultural heritage. The pair form a close bond. Also on the scene is the enigmatic Dr Henry Jekyll (Russell Crowe). And where there is a Jekyll, there just has to be a Hyde. He heads a secret organisation with a mandate to recognise, examine, contain and destroy evil in the world. Chris Vail (Jake Johnson) is Nick Morton’s mate and fellow partner in crime, in this case a grave robber.

What a load of codswallop. I struggle to find anything nice to say about this movie, which I regard as arrant nonsense. Where they have really spent up big is with the special effects (not to overlook Cruise’s likely large salary). Perhaps they should have instead taken a good, hard look at crafting a half decent storyline … because that is really where this falls down.

It doesn’t make a whole lot of sense. There is a lot of running and chasing, brutal fighting and looks of desperation and anguish, but little more. Honestly, if the effects weren’t there and Cruise wasn’t associated with it, I would simply regard The Mummy as “D” grade late night television fare.

Talking of Cruise, this is his worst acting performance, bar none. Him looking for laughs and appearing puzzled (there are plenty of flashbacks) just made me cringe.

As you can tell by now, I detested The Mummy, which is a total waste of time and space. Directed and co-produced by Alex Kurtzman (People Like Us), who is also partly responsible for the screen story, this is an appalling attempt by Universal Pictures to kick-start a franchise of monster movies under the “Dark Universe” banner. If they are all going to be like this, they should stop now.

Just go back and view The Mummy circa 1932, starring Boris Karloff, or Brendan Fraser’s effort in 1999 because this take scores only a 1 out of 10.