Quick test – who was L. S. Lowry? If you’ve got no idea, I suspect you’re not alone. Lowry went from obscurity in the suburbs of Manchester to become one of the most revered British artists of the 20th Century. Director Adrian Noble explores the artist’s life in microcosm in Mrs Lowry and Son. 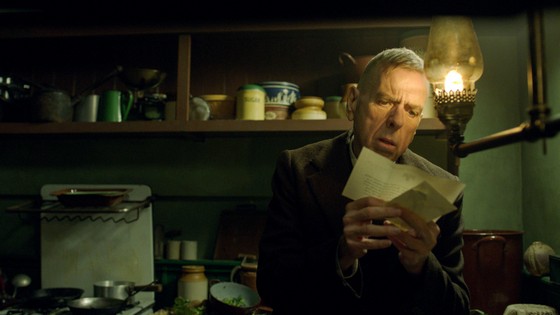 Lowry is famous for a few things – notably being the official artist at Queen Elizabeth II’s coronation. The film however takes place before all that. It’s set over a few weeks (days maybe?) in 1934, with forays into the past. While it delves into Lowry’s signature style (his deceptively simple depiction of working-class life in Manchester using so-called “matchstick people”), his later achievements are only hinted at.

Laurie Lowry (Timothy Spall) lives in the industrial town of Pendelbury. Although a trained artist, he has to make a living as a rent collector. But his passion is painting – something he can only do at night. Added to this is the need to care for his aging mother Elizabeth (Vanessa Redgrave). She, however, is a handful. Her husband died some years earlier leaving many debts. Instead of living in the posh part of Manchester, they had to move to Pendelbury; something Elizabeth is still bitter about. That bitterness, it seems, seeps into other aspects of her life. She barely has a good word to say about Laurie; and nothing good to say about his art. But he persists. Finally, it looks like a breakthrough of sorts happens when Laurie receives a letter from a London gallery praising his work and mooting a possible exhibition. Elizabeth however is none too pleased.

Mrs Lowry and Son is an impressionistic examination of a very British artist. Lowry isn’t given to self-mutilation like Van Gogh. He’s not lecherous like Picasso or flighty like Cezanne. He’s a solid, even stolid, British gentleman with a gentle demeanour and an eye for the beauty in the mundane. So don’t expect a lot of fireworks in this film. It’s in the same wheelhouse as, say, The King’s Speech; where a barbed word or a lifted eyebrow is the only “tell” for roiling emotions. That said, it reveals much about Lowry as a man and as an artist – if you’re prepared to look for it. Martyn Hesford provides the screenplay; which adapts his own stage play of the same title.

As the title suggests, this is basically a two-hander, although a few other characters drift in and out of the film. Timothy Spall is fabulous as Laurie, even though it’s the less “showy” role. He gives a characteristically nuanced performance that digs into the marrow without histrionics. Vanessa Redgrave gets the juicier part as the snarky, manipulative Elizabeth. She too finds the light-and-dark in the character, subtly suggesting that maybe some (though certainly not all) of her difficulties are due to creeping dementia rather than malice.

As films about artists go, Mrs Lowry and Son is one of the more carefully crafted and gently powerful entries in the canon. Even though it’s quite slow-moving, I found myself engrossed by both the dynamic between the characters, and the revelations about Lowry and his process.