Boise, Idaho. Storm clouds have rolled in, causing all flights to be cancelled. Ben (Idris Elba) is a neurosurgeon trying to get a flight to Denver. He needs to catch a connecting flight to New York, where he’s scheduled to perform life-saving surgery on a ten-year old boy. Alex (Kate Winslet) is a photojournalist who has been shooting neo-Nazi skinheads for a magazine article. She is also keen to fly out, so she can attend her own wedding the next day. Alex manages to find grizzled veteran pilot Walter (Beau Bridges), who agrees to fly them out in his rickety old light plane. 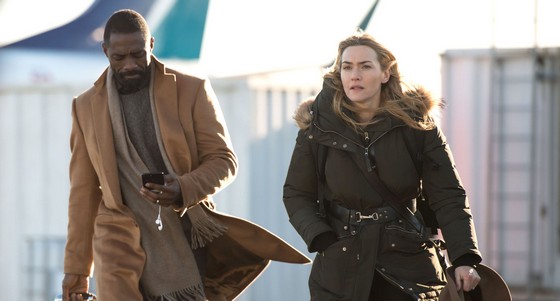 Accompanied by Walter’s golden retriever, Alex and Ben head out. But before long they are overtaken by the fierce storm. Walter suffers a stroke, and the plane crashes into the Rockies. Alex has a broken leg and Ben has suffered some deep wounds. There’s no cell phone reception. Ben and Alex disagree on the best strategy. The impulsive and headstrong Alex wants to leave the wreckage of the plane and make their way down the mountain. The prickly, reserved Ben however insists they stay where they are and wait for rescue. Ben is determined to survive. The pair only have Walter’s dog for company, and I must admit that I loved the dog here. Ben and Alex endure a number of hazards – including hypothermia and a cougar – as they bicker over their preferred survival strategies.

Part love story and part survival drama, The Mountain Between Us is a high-altitude soap opera. It’s based on Charles Martin’s best-selling novel. Screenwriters J Mills Goodloe (the YA romantic drama Everything, Everything) and Chris Weitz (Rogue One) adapted the book for the screen. But this film somehow lacks the emotional heft of other recent survival stories like Wild. And some of the dialogue is pretty trite and cliched.

Palestinian-born filmmaker Hany Abu-Assad (the Oscar nominated love story Omar) makes his Hollywood feature debut here. His pacing however is pedestrian, and there’s a lack of real tension as he tends to telegraph his punches. But the film is certainly a handsomely mounted production. Abu-Assad’s decision to actually film in the majestic peaks of British Columbia’s Purcell Mountains rather than in a studio with green-screen and CGI brings an authenticity to the experience. The snow-covered wilderness gives the film a cold visual surface and lends realism to the predicament facing its two protagonists. Australian cinematographer Mandy Walker (Hidden Figures) has shot the film beautifully. She also uses handheld cameras during the plane crash sequence to immerse the audience in the drama, and reverts to soft focus cinematography for a later, tastefully composed, sex scene.

The Mountain Between Us is essentially a two-hander drama. As such, it requires a couple of charismatic performers to hold our attention. Thankfully Winslet and Elba share a strong chemistry that elevates the thin material. Their prickly odd-couple dynamic works and the two stars make the film bearable.

Margot Robbie, and then Rosamund Pike, both pulled out of the project before the role went to Winslet. Similarly, Elba stepped into the role of Ben only after Michael Fassbender pulled out. Elba has a strong presence, but here he often tempers his gruff and masculine style with some touches of sensitivity. Winslet survived the sinking of the Titanic, and is no stranger to physically demanding roles. The location informs the performances of the two stars, and Abu-Assad certainly makes emotional and physical demands on his two stars .