Mad bugger. That was my first thought when I saw one of the opening shots in this picturesque documentary, completed with the accompaniment of the Australian Chamber Orchestra. There was this bloke scaling a sheer cliff face, seemingly without any form of aid, staring death in the face. His hands and feet were searching for the tiniest of cracks or leverage in the unforgiving surface. Shocking and somehow admirable at the same time. Pushing the boundaries. Setting personal challenges … but at what cost?

Mountain is a cinematic and musical collaboration, an odyssey through some of the planet’s most awesome landscapes, showing the spellbinding force of high places – and their ongoing power to shape our lives and our dreams. Only three centuries ago, climbing a mountain would have been considered close to lunacy. The idea scarcely existed that wild landscapes might hold any sort of attraction. Peaks were places of peril, not beauty. How then have mountains come to hold us spellbound, drawing us into their dominion, often at the cost of our lives? That is what this documentary sets out to answer. 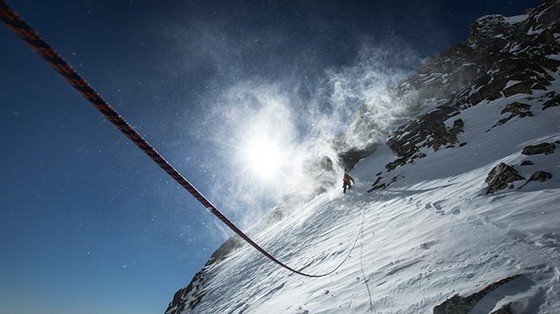 By the time Mount Everest was vanquished in the mid-twentieth century, mountaineering had become a quest for mastery rather than a search for mystery. Mountains were seen as adversaries to be overcome, places where fear could be taken to the edge – or beyond. Millions are now enchanted by the magic of mountains. And where once their remoteness protected their purity, today they have become theatres for recreation: managed and commoditised as parks and playgrounds. But mountains are so much more than an escape, or an enemy to be overcome. Their greatest value lies in their power to inspire.

Jen Peedom, director of Sherpa and Richard Tognetti, artistic director of the Australian Chamber Orchestra, drove this international collaboration  that also involved US-based cinematographer Renan Ozturk, British writer Robert Macfarlane and American actor Willem Dafoe. The beauty, the grandeur, the danger and the terror of some of the most spectacular natural formations on the planet are captured by cinematographer Ozturk. Some of the narration was insightful, while other verbiage appeared obvious or unnecessary – like saying something just for the sake of it. Dafoe’s rich tones were a definite plus.

There appeared to be a real randomness about the narrative and the shots used. I could discern no rhyme or reason as to why this was so and there was even a repetitious reference to Everest being the ultimate challenge. Shots of natural wonder and awe were juxtaposed with man’s endeavors on foot, by bike, on skis and snowboard – some of it playing with solitude and others with the frenetic and frenzied. Most are aerial shots, although there are also a number taken at ground level. And what would a doco about snow-covered mountains be without respectful spiritual footage in amongst the daredevil pursuits?

Notwithstanding the merits of the endeavor here, I found myself regularly clock watching. A few minutes would have been nice, but one hour 14 was too much.