Morning Wars (or The Morning Show, if you are viewing from anywhere other than Australia) was heavily promoted as the premier launch drama of the new Apple TV+ streaming platform.  With Reece Witherspoon, Jennifer Aniston, Billy Crudup and Steve Carrell all contributing their considerable star quality to the production, you know up front that some serious coin has been spent.  Billed as a dramatic comedy (isn’t all comedy dramatic though), Morning Wars is a slick piece you would feel was surely put together when the first gasps were in after the Weinstein allegations hit the headlines.  (Apparently this was not the case, though the show did alter its planned course somewhat in its wake). 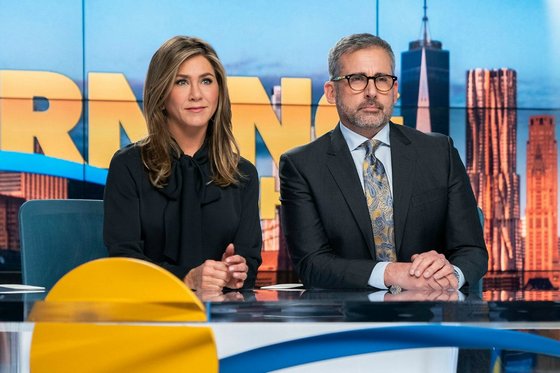 The opening scenes of Morning Wars introduce us to the pre-dawn hours before breakfast TV explodes onto the small screen.  This is the time of early morning when there is still a chance that anything could yet happen to change the lineup of the day for The Morning Show.  Station legend Alex Levy (Aniston) rolls up for work in the early morning dark as usual to begin the preparation needed prior to being miked up for her role as co-host. What’s different about today is that waiting for Alex on the steps of the station is the show’s producer.

As everyone’s phones start going nuts and Alex wonders who has died, the news that co-host of the Morning Show, Mitch Kessler (Carrell) has been ousted for sexual misconduct is upsetting for Alex to hear but not a total surprise.  Alex and Mitch have been together on screen for fifteen years and the dynamic between the two of them was always what gave The Morning Show its killer ratings. Fronting up to the camera to ‘grieve as a family’ with the public, Alex is aware that the shakeup has come at the worst possible time with her own contract stalled for renewal.  Also, it more than irks Alex that she was never included in the conversation around how the network was going to guide The Morning Show through what would come next.

Bradley Jackson, scrappy journalist extraordinaire, is having a moment thanks to a YouTuber filming a few of her choice words as Bradley reports in from a coal mine protest.  Something of a industry pariah since dropping the F bomb several times during another live cross, BradIey is now invited to guest on The Morning Show by one of the team’s sharp eyed talent spotters.

What is curious about Morning Wars is that it manages to duck and weave around making grander statements on the gendered issues which are its plot drivers. There are missed opportunities in the early episodes to to provoke a greater response, whether that be outrage or dissent. The #metoo movement is referenced early on, stated by Mitch’s character to be an ‘over correction’, and it is through this character that some of the most incisive observations are made about this pivotal point in our time.

As much as we like seeing all of these great actors on screen in the same series, the (self) casting of Aniston and Witherspoon gives scant consideration to what the characters themselves espouse when railing about representation.  They are both of a type we’re used to seeing when it comes to female television hosts.  Don’t need to state what that is – Witherspoon’s hair is even coloured to match.

Is Morning Wars an insightful and savage take on the television industry?  It skates along the edge of something revelatory, but a few episodes in, it’s not there yet.  There’s some sharp acting delivered out of the gate, mostly by Aniston, and the viewer gets the keen sense that the numerous viewpoints of more minor staffers are included for a larger purpose other than scene setting.  Television shows are massive projects to get on the air everyday, and there’s a lot of separate interactions necessary to make up the whole.

Morning Wars is a ten episode series currently streaming in its entirety on Apple TV+.  News in today as this reviewer types away, is that Morning Wars/The Morning Show has been included in the 2020 Golden Globe nominations (Best Television Drama, and Best Performance by an Actress in a Television Series, Drama (Aniston and Witherspoon).