Men in Black: International is a disappointing resurrection of the franchise. Some elements of Men in Black I first fell in love with remain. But it features an overly convoluted storyline and too many awkward attempts at humour.

It’s hard to believe that Will Smith and Tommy Lee Jones kicked off the series in 1997. It also spawned two sequels featuring the pair in 2002 and 2012. No sign of either of them in this reboot. 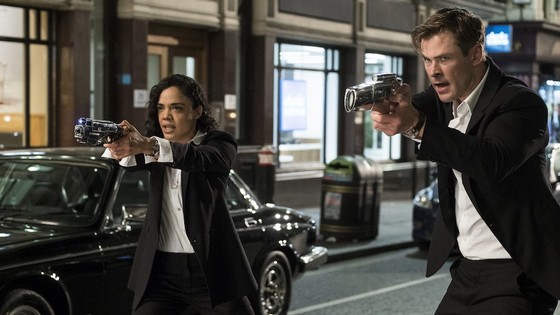 We meet M (Tessa Thompson) as a young girl named Molly. She, along with her parents, has had a close encounter with visitors from another world. Having evaded the MIB’s memory-wiping Neuralyzer, Molly is determined to discover the truth about aliens on Earth and the mysterious black-suited men. She spends all her available time seeking answers and years later discovers MIB headquarters in New York.

Impressed with Molly’s smarts and detective skills, Agent O (Emma Thompson) makes her an agent-in-training, assigning her new identity: M. Eager to climb the MIB career ladder, M engineers a partnership with H (Chris Hemsworth). He’s a legendary agent with serious swagger. And he once famously saved the world armed with just his wits – and his De-Atomizer. The duo’s first assignment is to meet with alien royalty, Vungus, and show him a good time during his visit to Earth. But within moments of their arrival at a posh nightclub, Vungus is assassinated. H and M discover he was concealing a weapon capable of obliterating entire galaxies.

Now, an aggressive species known as The Hive have gathered on Earth to take possession of its powers. Two villainous and acrobatic assassins lead the infamous aliens. Struggling to understand how Vungus’ location could have been known by the assassins, H and M suspect someone within the MIB organisation is behind the breach of classified information.

Tessa Thompson as agent M is arguably the best thing about MIB: International. Early on – in a decided pointer to the #MeToo movement – she draws a line in the sand as to what is acceptable behaviour towards her. Still, the smouldering chemistry between her and Chris Hemsworth’s H is an important part of the plot. The suave Hemsworth continues with self-deprecating humour; a hallmark in his Thor lately. But it becomes his default and is a little too much. Emma Thompson doesn’t have much to do, but what she does she does with her usual aplomb.

Strangely, the film has many flat patches. Picking the internal baddie was hardly a challenge. Surely a twist was in order. The aliens were okay, but nothing to particularly write home about. Even the sight gag with Hemsworth on the Eiffel Tower wasn’t as clever as intended. Quite frankly, I expected more from the whole film.