Since it began five years ago, StageArt has built a richly deserved reputation for bringing top-flight musical theatre to this country. Four time 2010 Tony Award winner (including Best Musical), Memphis The Musical is its latest and one of its best. Music and lyrics are by David Bryan (the keyboard player for Bon Jovi), with lyrics and book by Joe DiPietro.

The show is loosely based on Memphis disc jockey Dewey Phillips. Phillips was one of the first white DJs to play black music in the 1950s. 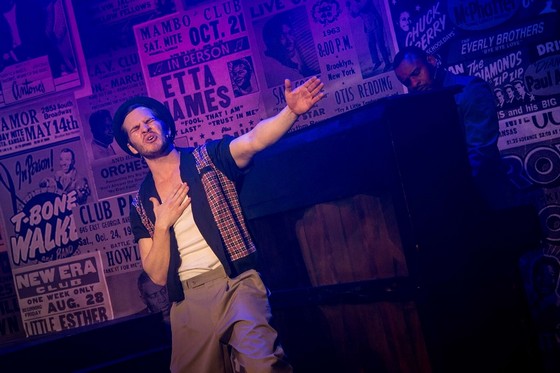 The year is 1951. A Caucasian guy with a love of African-American sounds – Huey Calhoun (James Elmer) – walks into a black club operated by Delray Farrell (Iopu Auva’a). Calhoun is captivated by the voice of Delray’s sister Felicia (Elandrah Eramiha-Feo). Calhoun stands out because of his colour and is is an unwelcome presence. Yet he perseveres, returning night after night. Sacked from many menial jobs, his real passion is music. Eventually he hijacks the microphone at a local (white) radio station, where he wants a job as a disc jockey.

More than that, Calhoun dares play music the likes of which has never before hit the airwaves from such a station. This earns the immediate ire of the owner, Mr Simmons (Greg Pascoe) – but the instant adulation of the listening public. Calhoun is smitten by Felicia Farrell and promises to play her music on the radio for all to hear. But racial segregation laws hamper any chance of their relationship being made public. Add to that the anger of Felicia’s brother and Calhoun’s mother, Gladys (Mandi Lodge). This is the story of what happens to Felicia and Calhoun against a backdrop of bigotry and oppression.

James Elmer (So You Think You Can Dance) not only has a finely tuned voice, but is light on his feet. He also possesses a great sense of comic timing. You’re left wide-eyed at his flawless showing. Elandrah Eramiha-Feo also impresses with her rich vocals. Hers is a dignified performance as the club singer with designs on going much further. Mandi Lodge all but steals the limelight not once but twice, with her powerful pipes (what range!), channeling her character Gladys’s “take no prisoners” attitude. Her intoxicating number soon after interval all but brings the house down.

Those I have mentioned are ably supported by an enthusiastic ensemble, with a total cast of 18.

Although the music may not be familiar, it certainly strikes a chord. Many of the lyrics reflect the troubled times, as well as helping to move the story along. The songs (16 in Act I and 11 in Act II) range from open-hearted crowd pleasers, to the spiritual, to intimate soul searchers. Well-choreographed dance moves (the choreographer is Kirra Sibel) pepper the narrative.

The black and white staging, incorporating what purports to be a small radio booth, is simple but effective. Plastered all over the set are posters of upcoming concerts of the day featuring the likes of Fats Domino, Count Basie, BB King, and The Everly Brothers. 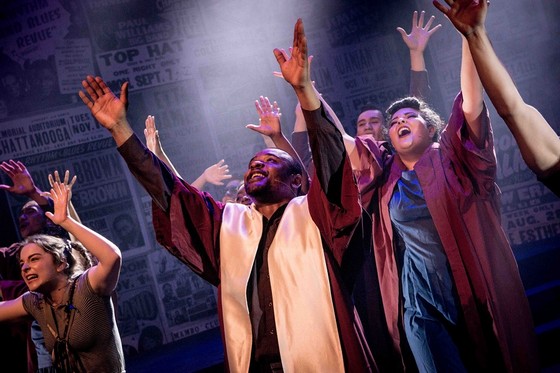 Dean Drieberg not only directs the production, but is accountable for the set design. I also commend the costume design and colouring – primarily blue, grey, purple and maroon tones (Emilija Tanner is responsible).

Memphis The Musical plays on the themes of vulnerability and tension, combining grit with humour and pathos. The way the story is woven ensures that one moment you feel outrage and soon after you are captivated by audaciousness of Calhoun’s manipulative ways.

A triumph by any measure, Memphis runs for 2 hours 10 minutes (plus interval) and is playing at Chapel off Chapel until 28 October 2017.